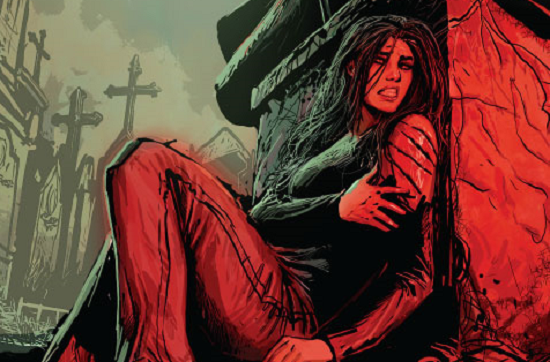 Ron Marz is nearing the halfway point of the first arc of return to Witchblade, with a story in which Sara Pezzini has been separated from the Artifact that made her life hell for the better part of the last 20 years in publication time. She's glad to be rid of it--or, she was, until somebody shot her with a piece of it. Now, awake for the first time since, she's not too happy to find an agent of the Angelus standing over her friend and deputy. That much you see in the teaser pages that were already online. For more, check out our monthly commentary track-style conversation with Marz--which artist Laura Braga should be joining next month--below. And remember--this is a SPOILER-HEAVY conversation. If you haven't read it already, go buy Witchblade #172 now and read along with us. 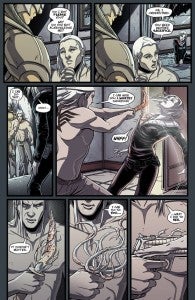 ComicBook.com: Is it just me, or are the religious nuts that are the most fun to write, the ones who get their comeuppance from their "god" right then and there? Ron Marz: Fanatics are fun to write, whatever their particular flavor. In this instance, I wanted to show that this nut job's devotion to the Angelus was not at all reciprocated. Humanity is beneath notice for the Angelus. We're less to the Angelus than insects are to us. So part of the purpose was to showcase that sense of haughty indifference. ComicBook.com: This is a very Artifacts-y storyline. Will we be seeing some crossover or fallout between the titles (note I don't mean a literal issue-to-issue crossover, necessarily)? Marz: No, Witchblade is going to stay pretty self-contained for the time being. Artifacts is currently showcasing the one-off stories by the Talent Hunt winners, so those issues are fairly self-contained as well. That's not to say "Witchblade" won't feature elements from the broader Top Cow Universe when it's appropriate. ComicBook.com: I mean, nobody really thought the Angelus soldier was going to kill Sara in her sleep or anything, but is it ever frustrating when the preview pages give away a reveal like how that scene played out? Marz: It goes with the territory, unfortunately. The news cycle is voracious, even in the comics press. As a writer, you just have to make sure the issue contains more surprises than the ones you give away in the first batch of pages. Which you should be doing anyway. 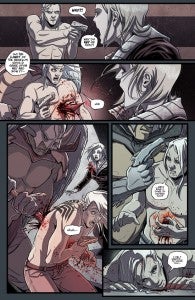 ComicBook.com: When Sara says "No, it has to be me" who finishes the process of sealing away the Witchblade, did she mean literally, or just emotionally? Marz: Both, actually. There had to be a sense that this was a big deal for Sara to be giving up the Witchblade. It couldn't be cavalier or easy for her. I wanted to make sure the readers had the sense that this was a life-altering decision. ComicBook.com: Did you ever consider actually handing the Witchblade off to somebody else? It seems almost tragic that Sara keeps repeating that refrain that this part of her life is over, and the arc of the story is obviously pointed at re-establishing her status quo. Marz: You know, that's something that gets discussed every once in a while. The Witchblade is a cyclical concept, or maybe "legacy concept" is a better way to describe it. There were bearers before Sara, there will be bearers after Sara, so we know there's room to tell other stories, and for an eventual passing of the torch. But for now, we're telling Sara's stories, and an aspect of her story is that she can't ever completely get away from the Witchblade's influence. It's certainly as much as a curse as it is a blessing, and maybe even more of a curse. I've always tried to portray a sense of tragedy in Sara's stories. ComicBook.com: With Sara back up and running, will she get her job back? Again, it seems to me that the mayor has other plans. Marz: That would be telling. Obviously the mayor has no use for Sara, and no interest in having her do a job she's imminently qualified to do. I think any character needs villains, whether they're supernatural creatures from beyond, or small-town sexist rubes. 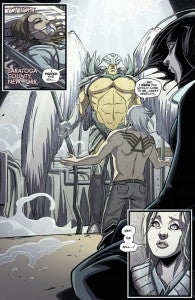 ComicBook.com: You're building up a cast here, but can we expect Sara to stay in Saratoga County? It seems like a fairly combustible situation with Pilcher and the mayor, and when all of this starts to come to a head it kind of feels like everyone will knows it's Sara's fault. Marz: That's always one of the complications in Sara's life, keeping the secret of the Witchblade, and managing the fallout that happens because of it. I've come to really like the supporting cast we've got in the book now, especially Deputy Rooney. I'd actually like to flesh out the supporting cast a bit more once we're through this first arc, and even add to it. That's not to say Sara won't have other adventures in other places. It's been fun for me to write Sara in a different setting, since the entirety of my first run was based in Manhattan. ComicBook.com: That asked, do you plan on playing out the story that Sara and Rooney are going to tell here at all? Marz: Well, I'm not planning on doing an issue that's set entirely in a courtroom, if that's what you're asking. Not that I think that wouldn't be interesting, I think it very well could be. But there's only a finite number of pages every month and I have to allot them in order tell what I think is the most interesting story. So some of the legal or procedural aspects of Sara's "civilian" job end up happening off panel by necessity. ComicBook.com: It would be really inconvenient if nobody believed them and suddenly there was a piece of the Witchblade trapped more or less indefinitely in evidence, wouldn't it? Marz: It would, but that's not the story we have room to tell, at least right now. This arc is really about Sara giving up the Witchblade, and then wrestling with the decision of whether she has to take it back. ComicBook.com: I feel like the Angelus in particular gives Laura's style a feel that seems a bit anime-inspired...but obviously not the Witchblade anime, because from what little I've seen that's kind of insane. Are you familiar with that material? Marz: Yes, I've seen a bit of the Witchblade anime, and it's pretty over the top. From my understanding, Top Cow gave the anime producers a pretty long leash to develop the story they wanted to tell. There were some basic parameters, but the philosophy was to let the people who know how to make an anime make an anime, rather than micro-manage them. Truthfully, at some point I intend to get a nod to the anime into the monthly title. Probably not something overt, but a more subtle connection that will allow fans of the comic and the anime to get a kick out of it.

Ron Marz on Witchblade #172, Artifacts and A Nod to the Witchblade Anime