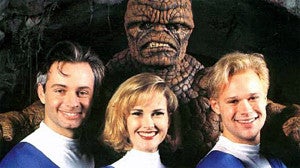 While it's not clear the original speaker has any authority beyond just a working knowledge of the film's history, Comic Book Movie has picked up on a message board post in which a user claims Fox has only about a year remaining to begin principal photography on Fantastic Four before they stand to lose the rights.

The logic goes that the rights will revert back to Marvel/Disney if the next movie isn't in active production by seven years after the release date of Fantastic 4: Rise of the Silver Surfer, which may be true--but it also may simply be speculation based on the fact that seven years was the widely-reported window that Fox had to keep the rights in the past--which led to the notoriously-bad Roger Corman film based on the characters.

Once they begin filming, there are other dates that they have to meet. They can't just take 5 years to film the movie. However, the actual time that they have to release the film after filming begins remains a guarded secret by those in the know.

Fox can change the release date. They aren't locked into March 2015. However, what they must do is to begin filming within 7 years after the last FF film was released. Announcing release dates, changing release dates, announcing directors, or anything similar will not stop the FF from reverting. The only thing that will stop the clock is for filming to begin by Fall of 2014.

The film is currently schedule for release in summer 2015, but some fans have wondered whether that target is realistic since Fox haven't yet started to announce the cast and reports originally suggested that it would start filming this month. While neither Avengers: Age of Ultron nor Batman vs. Superman are filming, there's a big difference in terms of the necessary production lead time for a sequel versus the first installment of a franchise.

The film, though, doesn't need to be in theaters in 2015; they just have to have production underway by fall of 2014, according to this claim.

Director Josh Trank, who is expected to take on the FF, is certainly aware of the history of the Corman film; he recently appeared in an episode of Arrested Development that made fun of the film--which was made for $1 million and is a classic of camp awfulness.

Rumor: Fantastic Four Reboot Has a Year to Start Shooting