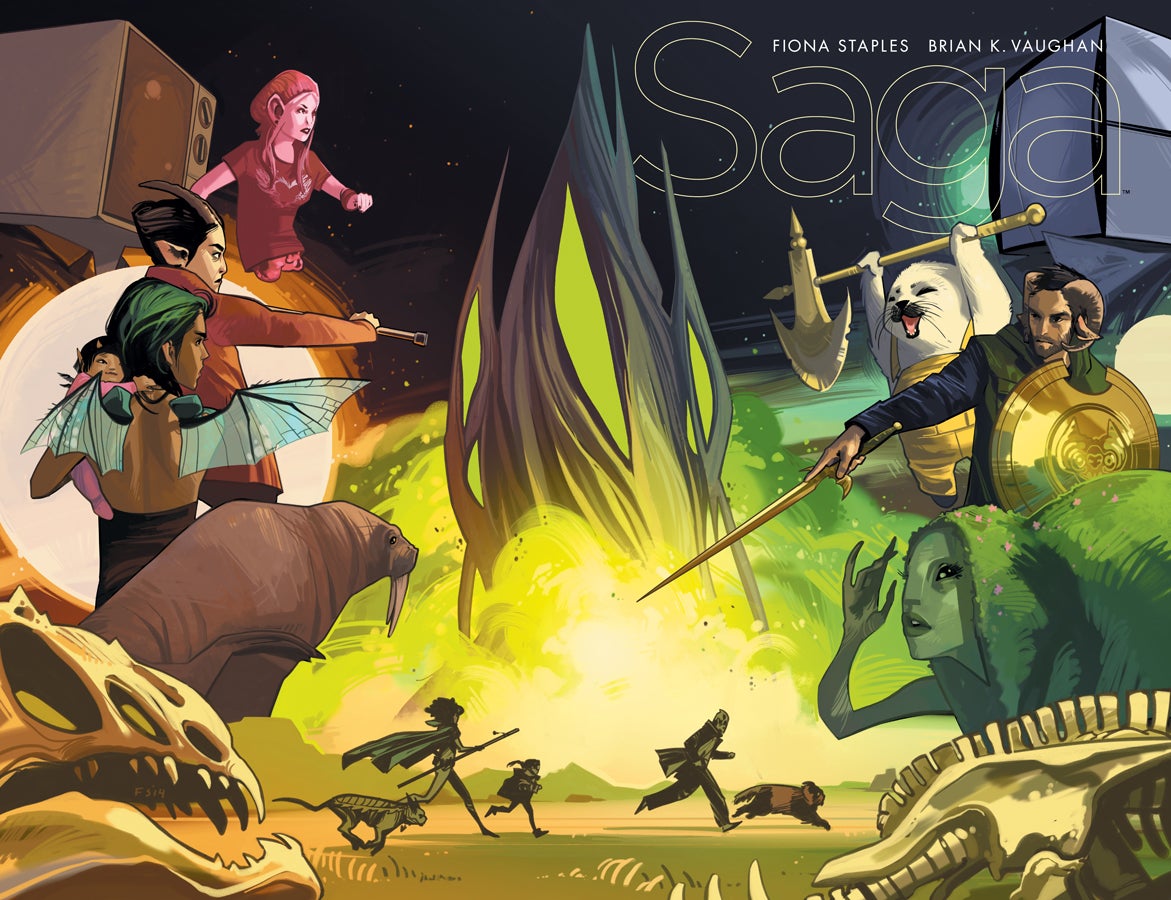 Saga returns this week with a broader scope than ever before. The cast of characters has continued to expand throughout the series, and after the events of Saga #24 there are three distinct plotlines running parallel to one another. Brian K. Vaughan and Fiona Staples take time to visit each plot and character here, refamiliarizing readers with the status quo and setting up the next five issues of story. But that all comes after a five page introduction with an entirely different focus.

Staples opens Saga #25 in black and white, cueing readers into the historical nature of the sequence while simultaneously drawing a connection to classic Hollywood cinema (think newsreels during WWII). It's an aesthetic tied to what is being shown: the drafting of soldiers from Landfall. The introduction is not about Marko, Alanna, Prince Robot IV, The Will, or any of the many characters they have encountered. It's about history, the shared history that defines them all.

On the following page Staples shifts from this aesthetic into the modern day. Panels reveal the horrors of war followed by a fully colored depiction of white grave markers reminiscent of Arlington Cemetery. In the top panels, Staples constructs imagery that again calls back to WWII newsreels with troops launching themselves from trenches. She also pulls from a true classic in a panel that homages Pietà, revealing a mother's despair in a truly stunning image. The use of carefully aligned white pillars in the final panel of the cemetery is iconic. It's the same setting Steven Spielberg uses in Saving Private Ryan to transition from past to present. This and other familiar images are not accidental. They tap into our cultural zeitgeist, providing a shared experience through singular snapshots.

With the addition of color, the period shifts forward into a world that is more reflective of our present than our past. Teenagers shown at a drive-in theater holds a modern, if not contemporary, aesthetic. Images of potential recruits to a volunteer army, battle scenes on distant deserts, and recreation on Landfall all seem like they could be occurring at the same time as the rest of Saga #25. Despite the additions of wings and gigantic turtles, these panels all parallel recognizable elements of modern culture. That comparison is no accident and underlines Vaughan's scathing narration.

Hazel describes the majority of the all-volunteer army as being "poor as shit", the shift of battle "far away from their own solar system", and the inclusion of other planets until "almost everyone had skin in the game". The allusions to WWII make these Cold War transitions of the United States military seem all the more obvious. This is not a history woven from whole cloth, but one that mirrors the 20th Century. The meaning of a battle fought on a distant desert by a coalition of the willing could not be more plain. It makes the disdain for Landfall citizens who share nothing but apathy toward homeless soldiers and the atrocities of distant wars a very personal attack on our own culture. In Staples' imagery and Vaughan's narration, we come to understand that the history of Saga is our own.

There is a lot to love in Saga #25 beyond these initial pages. It's frightening and funny, endearing and engrossing, clever and colorful. It's everything we've come to expect from Saga. Yet these first five pages serve as an important reminder that this is not only a wild space epic, but a story about all of us and the world we live in. Saga does not exist in a vacuum. In its characters and history we see our own. It is not only a beautifully told tale, but one that helps us to understand our history and ourselves.