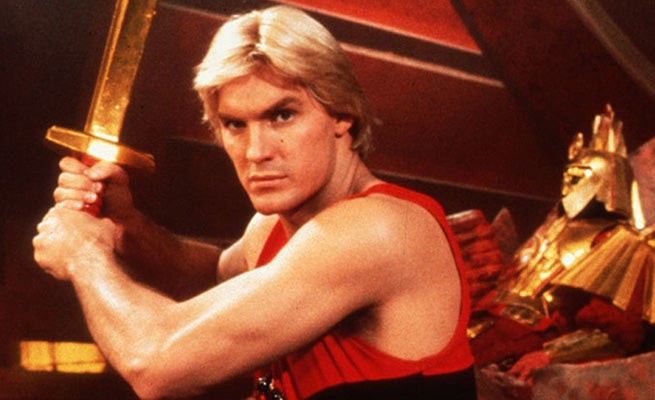 It's a busy time for Sam Jones, a.k.a. Savior of the Universe. The actor of Flash Gordon fame is working on a Life After Flash documentary, has the release of Ted 2 right around the corner, and is developing a couple of new projects aside from those. In the midst of his busy schedule, Jones found time to talk with us at ComicBook.com in an exclusive interview about all of his recent endeavors.

How are you doing? You've got a lot going on between the Life After Flash documentary and Ted 2.

Yeah, we're doing that documentary. I've got two other projects in development and of course, Ted 2 comes out June 26. I just signed for Ted 3. We're moving onwards and upwards, it's wonderful. It's a great adventure at this time in my life.

The documentary is called Life After Flash. When Flash Gordon hit, you couldn't have expected it to be such a phenomenon. What was that like?

It blew up. We make these movies, it all looks good, it all looks reassuring that it's going to do very well, especially with everyone speaking such positive words and projections about it, but you don't know how it's going to turn out. Here I am 36 years later… It's been a great adventure.

Is there a Flash Gordon 2 in the works?

Yeah, I've met with Matt Reilly, over at Fox he's the VP of production. Just like Seth McFarlane and myself, Flash Gordon has had a huge impact on his life as a young boy. All these years later, we've moved onwards and upwards. He's running operations and franchises. So, Matthew went out and acquired the screenplay rights to the Flash Gordon and he told me he has a personal interest in it. So, based on the meeting I had with him and his history with it, it looks like it's going to be green lit.

Would you be a part of that film?

Oh, absolutely. I'd be more than happy to be a part of it.

Awesome! Do you know anything about the script for that?

Oh, no not yet. I think they've brought in a producer named John Davis. It's been in development now for a large number of months. That always takes time- the development stages of the script, but it looks good.

That's exciting. You see Star Wars coming back, Marvel and DC super hero movies more and more. Is there any super hero you would want to play in a movie?

I played the Spirit in a television series back in 85. And, of course, I played the Highway Man who was considered the super hero type. I'm wide open. I'm for the traditional good represents good, evil represents evil, and not twisting those two.

Do you watch movies like Iron Man and Avengers?

Oh, yeah, every chance I get.

Do you think Flash Gordon had an impact on opening up the possibility to make movies like that happen today?

Oh, I do. Absolutely. Of course, the Ted franchise has opened up a whole new demographic for youngsters who didn't have the opportunity to see Flash Gordon, now are watching it because of Ted. It used to be my age group, my children's age group, now it's my grandkids really.

Working on Ted must have been a blast. Doing these comedies and such outrageous stuff with Seth McFarlane must be fun.

It was. It was Seth McFarlane's first live-action movie. He kept the environment open and free. It was a great place to be. I guess the term would be 'pressure free.'

So, you're signed on for Ted 2 and Ted 3. What can we expect from these films?

We haven't filmed Ted 3 yet. Ted 2, you're gonna see me doing more action. I believe it's gonna be funny, if not funnier.

Well, there's a huge demand for it, I think it will do very well. I really do.

Will you be out at Comic Con or any of those events over the summer?

Yeah I went out to San Diego Comic Con for the first time last year. Such a good time.

You mentioned that you have two projects you're working on, can you say anything about those yet?

Not really. There's a couple things… The good thing is that it' with credible, reputable people who are proven in the business. I'm excited about that but I really can't share much yet.

So, what's the bottom line on the Life After Flash documentary?

Once you're involved, the original concept was the influence that the character Flash Gordon had on the world before the movie, and of course, after the movie came out the influence the movie has had on myself and on the world. Its the first time in my life that I've had an unrestricted platform to just be myself. I'm not worried about where the camera is or what I'm saying. It's about my life with failures and successes. It's going to be very rewarding and uplifting. There's pieces of gold and nuggets from people in my life who have influenced me and I just want to pass that on.

Ted 2 hits theaters June 26, 2015, and you can learn more about the Life After Flash documentary by visiting LifeAfterFlash.com.