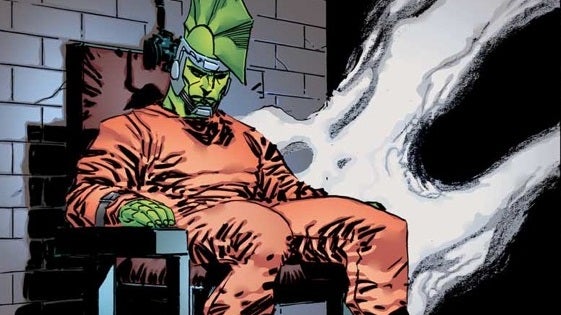 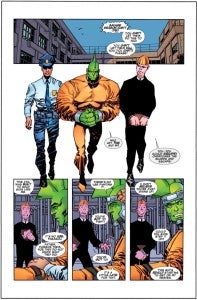 Dragon, who has been on death row for about a year now, is strapped into a chair, blasted through with electricity and... ...left powerless. The wheels of justice move slowly in Savage Dragon, which is a book that unspools in real time. Killing Dragon anytime soon wouldn't be a realistic storyline. Rather, as the courts work through his case, Dragon's powers have been removed using super-science developed by the Krylans, the alien race he used to rule as Emperor Kurr and then again briefly as Dragon. The endgame? Well, while he's on death row, he'll apparently have conjugal visits and, with his powers removed and the "Man of Steel/woman of Kleenex" problem resolved, he'll be able to  mate with Lorella, the last survivor of the race besides Dragon and, conveniently, a female of child-rearing age. Also, without his powers, he'll be able to be transferred to a normal prison, where he'll just be a tough, green guy with a fin on his head, rather than the never-ending parade of grudge-matches he's seen at the prison for super-criminals where he's been the last few months. Later today, Larsen will join ComicBook.com for our monthly commentary track taking an in-depth look at Savage Dragon, but with the fate of the lead character likely to be a big topic of conversation today, we figured we would share some of his thoughts on the status quo-changing move to end 192 issues with a character he created as a child and has written and drawn--even before his time with Image Comics--for more than 20 years. ComicBook.com: With Dragon seemingly in relative safety at the new prison, and a lengthy appeals process and the like ahead of him, will we see more of him? It strikes me that there's rarely been a parental figure who knew his kid was out superheroing and had no problem with it, so his dynamic with Malcolm could be very interesting...assuming you don't want to put him on the shelf for a while to give Malcolm a chance to shine.

Larsen: Dragon is Aunt May at this point or possible Bruce Wayne in Batman Beyond. He's there if we need him but Aunt May isn't going to steal the show. It's not ever going to be Aunt May's book. But for the short while--it's Malcolm's book and it's his turn to shine. I'm not going to be doing a lot of Dragon in jail brawling with bad guys issues. I've done a few of those and that's enough. ComicBook.com: With Dragon alive and kicking, what's to stop you backsliding a bit? Obviously you love writing that character... Larsen: I tried to lay down the ground rules and make it clear that he can't just get his powers back and be fine. It's still comics. I could always find a way--that's part of the job--but that's not something I'm planning on. If Dragon gets a shot of his old blood he can become his old self for a limited time, as indicated, but that will, ultimately, lead to his demise. ComicBook.com: Dragon definitely looks like he's slimmed down. You've been drawing him older lately, but is the body type just an extension of that or did he actually lose some muscle mass when he got zapped? Larsen: He lost a LOT of muscle mass and his body changed, physically. His hands are considerably smaller and his fangs are gone. The similar shots on pages 5 and 11 were there to further emphasize just how much he's changed. ComicBook.com: We've discussed in the past the conflict of acknowledging on-page that he wasn't likely to get executed anytime soon, and the fact that you'd promised this issue to be huge. Was de-powering Dragon always in the cards or was it something that you came up with to give him a little push out of the lead in the nearer term? Larsen: It wasn't always in the cards but with Lorella coming to Earth it really did seem like the only viable option. There's also the sense that, as long as he's got powers, Dragon could always step back into the spotlight and I didn't want that just hanging there. Dragon's personality is such that he just can't help but steal the show. I really wanted to emphasize to readers that he's not going to do that again. He's done.