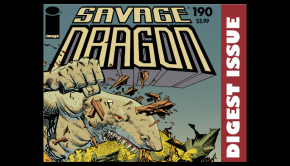 This week's issue of Erik Larsen's Savage Dragon--#190--is still available through Diamond Comics Distributors, so why is it going for $13 (that's about four times the cover price) on eBay? Probably because the book, which will obviously only be reprinted in "standard comic book size" for trade paperback collections and the like, is officially "limited edition" and so the prospective seller thought it was something that would be valuable. Of course, comics only appreciate in value after they've sold out. The higher price on eBay might cause some misunderstandings with fans hoping to get their hands on the issue, which was underordered by retailers who likely had no idea how to plan for such a unique product (Larsen says that, to his knowledge, no mainstream superhero comic has printed both a standard and Digest version of the same issue in recent memory). So what's the real situation? Will this book be worth money? Should people be stocking up at this paltry $13 level? In fact, Larsen has said on social media, he overprinted the issue significantly and plans to make it an item he can carry around with him to conventions for a long time--this in spite of the fact that rumor has it Dragon himself may not be long for this world, with his son Malcolm taking over the title. When I posted it to Facebook, the response was almost immediate. "If anyone actually pays that, they're idiots," said Savage Dragon superfan and series editor Gavin Higginbotham, who writes a regular column with me here at ComicBook.com. "There's a ton of stock waiting to be reordered." "That...makes no sense," Larsen added. "We printed MORE than THREE TIMES the quantity ordered. Copies should be available in ample supply."