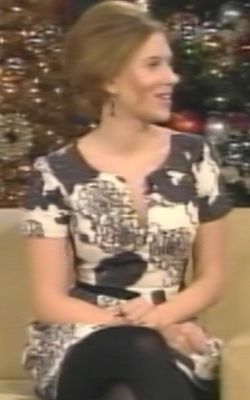 Actress Scarlett Johansson, who is starring in the upcoming comic book movie The Spirit, appeared on the Wednesday, December 17, 2008 episode of The Tonight Show with Jay Leno. During the appearance, Johansson complained about a cold that she claimed to have caught from Samuel L. Jackson. Samuel L. Jackson is a co-star with Scarlett Johansson in The Spirit movie. Because the cold came about through the meeting of two major stars, Johansson felt that the cold must have significant value. Leno provided Johansson with a tissue to use to blow her nose. In order to determine if the cold did in fact have significant value, the tissue that Johansson blew her nose on will be auctioned of on eBay starting on Thursday, December 18, 2008. Neither Scarlett Johansson nor Jay Leno will profit from the used tissue, as all the proceeds will be donated to USA Harvest. USA Harvest is the largest all volunteer feeding organization in America. Photo: NBC