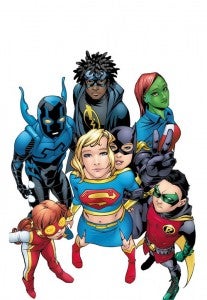 Nick Spencer, writer of Morning Glories and Secret Avengers, was once upon a time one of a number of young, up-and-coming writers flourishing at DC Comics. That was a short-lived relationship, and halfway through his time on T.H.U.N.D.E.R. Agents, Spencer signed a deal with Marvel Comics. His Victor Von Doom miniseries never saw the light of day due to budgetary constraints, but apparently that didn't affect his relationship with the publisher much. Not so for a previous, abortive attempt to launch a new series based on a beloved superhero property: Supergirl. After being announced as the book's new writer to begin with Supergirl #60 (back before the New 52 when DC's numbers went that high), Spencer didn't even complete an issue before he left the title, nominally to work on T.H.U.N.D.E.R. Agents but really, he later revealed, because DC didn't like the work he was turning in on Supergirl. It wasn't long before Brian Wood's Supergirl series, set to launch at the start of the New 52, also died on the vine--but it was a while before today's unannounced guest writer, which has set some tongues wagging in the context of Andy Diggle's departure from Action Comics and Joshua Hale Fialkov leaving his two Green Lantern titles. Well, in light of all of that conversation, Nick Spencer was apparently inspired to finally share his pitch for Supergirl with the world, taking to his blog with the cover above (provided by Batwoman's Amy Reeder) and explaining that his version of Supergirl would become a leader of the next generation of heroes, setting the stage for a potential Young Justice revival. Here's the pitch, stripped of his introduction and a bit of chatter:

The idea for the story was pretty simple: Kara learns how to be a leader. She had, to that point, been almost exclusively used as either a solo character, or in a supporting role on a team. I felt like someone wearing that 'S' on their chest would find people looking to them for answers when things got bad. The villain was intended to be the Luthor-Brainiac hybrid clone that Geoff Johns seeded in Adventure Comics. That scene in the one issue I did half of, with Lois running into the Planet offices, the original line was "Who here knew Lex Luthor had a son?" The original hope had been to use Aqualad here, too. The story beats that really stand out, to me: I know I wanted to have a scene where the fight gets really hectic, and Impulse runs away, with Kara really calmly and sympathetically talking to her about it, just the two of them, in the aftermath. That was supposed to be the big moment that Kara comes into her own. The entire team (except for Kara) were gonna get captured, and Kara would go to Superman, Batman, & Wonder Woman for advice— and from there, putting together ANOTHER team to rescue them (I forget who all was on that one- Black Alice, Klarion, Shining Knight, Arrowette, I think). The whole thing would climax at the launch party for the Flyover app, and the last scene was Impulse pulling Damian onto the dance floor. My secret hope was that the whole thing could work as a back-door pilot of sorts for a new Young Justice series.

She-Hulk: Every Easter Egg and Marvel Reference in Episode 1