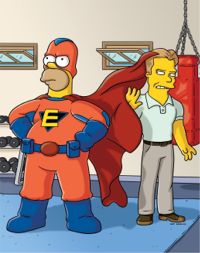 On the 21st season premier of The Simpsons, Seth Rogen will be guest-voicing the character of Lyle McCarthy. In the episode, Comic Book Buy casts Homer Simpson as the lead in “Everyman,” which is a feature film based on a new comic book superhero. Everyman possesses the amazing ability of being able to take on the powers of every superhero in every comic book he touches. Of course, Homer Simpson doesn’t exactly have the body type for a superhero, so the studio employs a celebrity fitness trainer to help get Homer into shape. The celebrity fitness trainer is Rogen’s character Lyle McCarthy. McCarthy does his best, but Homer struggles to keep with his new healthy regimen. The “Homer The Whopper” episode of The Simpsons airs on Sunday, September 27 from 8 PM to 8:30 PM ET on FOX. In addition to guest-voicing, Seth Rogen also co-wrote the episode. Photo Credit: FOX