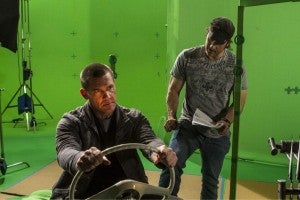 For the first time since production began on the much-anticipated sequel, Sin City: A Dame to Kill For filmmaker Robert Rodriguez has tweeted a behind-the-scenes production photograph--and followed it up with a mock-up of what the green-screen action will look like in the final film.

"Here's bad ass Josh Brolin driving a Rodriguez-mobile. (A green box with a steering wheel bolted on)," Rodriguez tweeted, including the photo at right.

Josh Brolin stars as Dwight in the film, which will be out in October; he's the same character played by Clive Owen in the first film, but since he's had reconstructive surgery to alter his appearance it all tracks.

Dwight McCarthy, appearing in the most stories of any Sin City character, is arguably the protagonist of the series inasmuch as it has one. He is the former lover of Ava Lord (Eva Green) and a protector to Old Town. 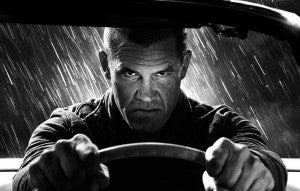 The film will adapt elements of A Dame to Kill For, one of Frank Miller's Sin City graphic novels, and incorporate new elements written by Miller for the film (and supposedly for a new graphic novel which will follow).

Rodriguez, upon tweeting the image at left, noted that fans shouldn't take it too literally:

"Here's a quick photo touch up I do to set a tone for the actors," the director tweeted, adding, "(Probably won't be raining in final movie)."

Sin City: A Dame to Kill For: Josh Brolin Photo in the Driving Rain