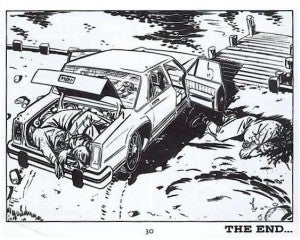 What's become clear in the last week or so is that people are really, really attached to their serialized stories. When Veronica Mars creator Rob Thomas decided to Kickstart a film version of his cult TV series, fans of the long-cancelled UPN/CW show that struggled to get 3 million viewers in its heyday gave Thomas that many dollars in 24 hours or so.

As a result, a number of other actors and producers have started talking very loudly and very publicly about whether they could accomplish something similar for shows like Chuck, Pushing Daisies and Terriers.

Then, we tossed around some ideas for comics that should be brought back that way. What kind of responses did we get? Well, mostly ideas for other comics that "should be on the list," "would have been better," etc.

One user pointed out that the whole list was flawed because Stray Bullets by David Lapham (right) wasn't on it, which is a fair assessment.

The most interesting responses, though, came from the creators of the comics on our list, some of whom said, "You know what, though? I'd really like to see this one get brought back instead, if it's me...."

So, we asked around. What would creators like to do, if Kickstarting an original graphic novel based on somebody else's property (or even your own that you can't afford to publish anymore) was an option? 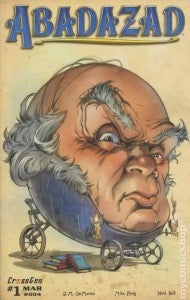 By J.M. DeMatteis and Mike Ploog, Abadazad was a victim of the CrossGen collapse. Published in 200 to rave reviews, the series vanished when Crossgen went out of business. Abadazad was co-owned by DeMatteis, Ploog, and CrossGen, but was acquired in 2006 by Disney with the rest of CrossGen's intellectual property.

The story was reborn in a unique hybrid format: a children's book series that combines diary entries, full-page illustrations, and sequential art. There should have been eight of those, but Disney stopped publishing them after three.

ComicBook.com asked DeMatteis if this was something he'd still want to do.

If money and audience size wasn't an issue, would you bring this title back?

I'd want to finish the story Mike Ploog and I started. We were cut off in the middle of a very big story and our characters are out there somewhere, trapped in limbo. We'd love to free them and let them continue on their way.

Todd Dezago was the first to write Young Justice, back when it was part of a crossover event and around the time Dezago was writing Impulse's solo book. The comic book itself, though, was passed off to Peter David for what became a favorite work of his fans.

So, what would he resurrect, if he had the chance?

"Well, Firefly, of course," the writer said. "I have (had, for years) several stories in mind for if they were ever to bring Impulse back. Or the never-seen Todd Dezago version of what Young Justice would've been."

"I'd bring back Near Death (my recent Image series which was cancelled after 11 issues due to low sales) in a heartbeat. Co-creator, Simone Guglielmini and I are already working on a follow-up as a mini-series that we'll solicit once it's finished. I've considered doing a Kickstarter campaign for Near Death (or Dynamo 5, another one of my Image series that didn't have a big enough audience), but the logistics of managing the campaign and fulfilling the rewards have so far kept me from taking the plunge. From what I've witnessed on the sidelines, that's like a full-time job in and of itself."

Nope. But I could come up with one pretty quick. 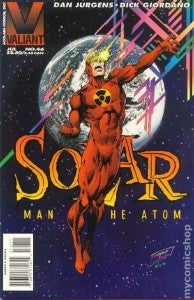 Doctor Solar is an old Gold Key character who's been published in the last twenty years by Valiant Comics and Dark Horse Comics. During Jurgens's time with the character, the character was at Valiant.

That version of the character was (not unlike what they did with Barry Allen and Jay Garrick when the former took over the role of Flash from the latter) a fan of the comic book stories published by Gold Key, making him a different character from the one Jim Shooter licensed for use but obviously derivative. That would likely complicate his use, since one assumes Valiant still owns the rights to Phil Seleski, while the rights to Dr. Raymond Solar are probably tied up with the rest of the Gold Key characters, who are owned by DreamWorks.

Hmmm... I might nominate SOLAR for this one. I enjoyed doing the book, found the character and set-up quite compelling and had lots of material planned going forward. Booster Gold would be consideration but probably isn't applicable here.

Absolutely. I've had a couple of things ready to go for quite some time.

Doom Patrol. Mostly because I think I could do better. I'd really try to make it an updated version of what the book was in the '60s instead of adding new characters to the team.

"I'm generally not one to do too much looking back. I'd rather look forward to what's next. So if someone was going to fund a project, I'd rather it be something new and different. But if I have to resurrect past project, it would certainly be the third volume of Samurai: Heaven and Earth. The story's in place, the covers are done, the first script is already written, but we've never been able to get back to it because of Luke Ross's work at Marvel. Hopefully a window opens up for us to do it at some point in the not-too-distant future."

Fabian Nicieza is a best-selling comic book writer with decades of experience writing for Marvel and DC, as well as outside of comics. So what would possess him to return to NFL Superpro? We asked... 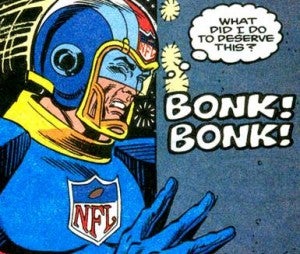 Well, I've predominantly worked on company-owned characters in my career, so if you mean if Marvel refused to pony up the money for a property they owned, but would be happy to publish the book if I raised the money?

Probably New Warriors or Nomad. But just for kicks, an NFL Superpro vs. Deadpool one shot!

Well, New Warriors and Nomad would require some editorial help because of everything that's happened to those characters in the last 10 years, but I could hand the script in for NFL Superpro vs. Deadpool this Friday!

And our old buddy Fred Van Lente? What's he say?

"None. I like it when things end. Frees up space for the next thing."

Six Comics Whose Creators Would Bring Them Back Via Kickstarter

Marvel Fan Creates A Trailer for the MCU