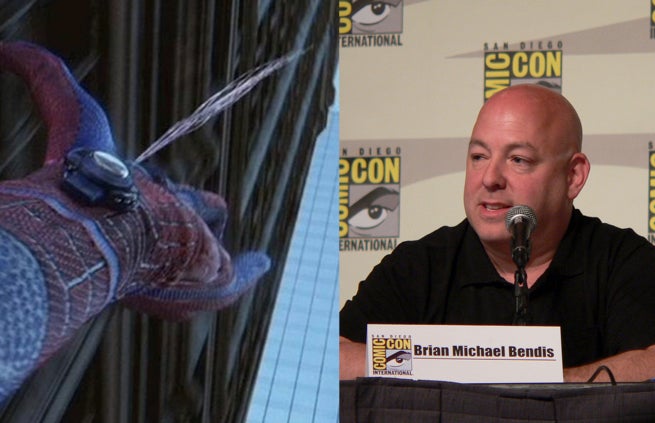 Along with being one of Marvel's most bankable comic book writers, Brian Michael Bendis also consults the entertainment conglomerate on its other media sources. Essentially, he ensures that an adaptation's producers and executives stay true to Marvel's four-colored source material.

And while it's no secret that Bendis has lent his opinions to several of Marvel Studios' Avengers films, a recent interview revealed that Marvel's licensing partner Sony has also enlisted the writer's help.

Apparently, when Sony was developing their 2012 Amazing Spider-Man reboot, the studio was torn between keeping the organic webshooters used in Sam Raimi's original trilogy, or using the mechanical webshooters that Spider-Man has relied on for most of his comic book history. With half the studio wanting organic shooters and the other half campaigning mechanical, they looked to Bendis as the tie-breaker.

Here's how the scenario went down, as Bendis told Yahoo! Movies:

"[Before Amazing Spider-Man], they sat me down in [Sony Co-Chairman] Amy Pascal's office with this big roomful of producers and writers and directors, and she looked at me and said "Organic webshooters or mechanical webshooters?" I said "mechanical," and half the table said, "Goddamn it!" They were mad because I was clearly the deciding vote, even though I didn't know that. So when I see the mechanical webshooters, I feel a little happiness. I feel like I did something good in the world."

The next time you watch either of Marc Webb's Spider-Man films, send a silent "Thank You" to Bendis. And with the state of Sony's Spider-Man plans currently in a flux, it looks like studio may need Bendis' spider-senses for a little more than webshooters.