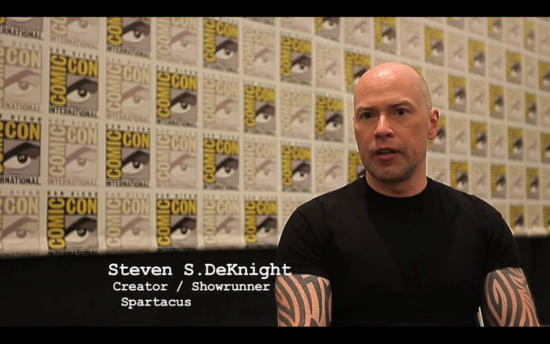 Just an hour or so after news broke that Daredevil had lost showrunner Drew Goddard, The Hollywood Reporter has the news that Goddard will be replaced with his Buffy the Vampire Slayer writers' room mate Steven DeKnight. DeKnight, who also ran Spartacus for three seasons on Starz, will take over Daredevil so that Goddard can focus more fully on The Sinister Six, the trade reports. They also claim that Goddard will remain with Daredevil in an advisory capacity, presumably so that he's compensated for whatever developmental work he's already done on the show. Netflix and Marvel will team on Daredevil, along with Jessica Jones, Iron Fist, Luke Cage and The Defenders, starting in 2015. The shows will be interconnected, building to The Defenders in the same way Iron Man, The Incredible Hulk, Thor and Captain America: The First Avenger led to Marvel's The Avengers -- and they'll be set in the same cinematic universe, which means they'll also share continuity with ABC's Agent Carter and Agents of S.H.I.E.L.D. Goddard is the second major defection from Marvel this weekend, after Scott Pilgrim vs. the World director Edgar Wright backed out of Ant-Man yesterday amid creative differences with studio brass. There's no indication that Goddard was similarly unhappy with his situation at Marvel, and the more likely scenario is that Sony simply wants his undivided attention since Sinister Six will tie into Venom and The Amazing Spider-Man 3 so Goddard's role with the studio is of strategic importance. Daredevil reportedly remains on track to be the first of the Marvel/Netflix series, debuting in 2015.