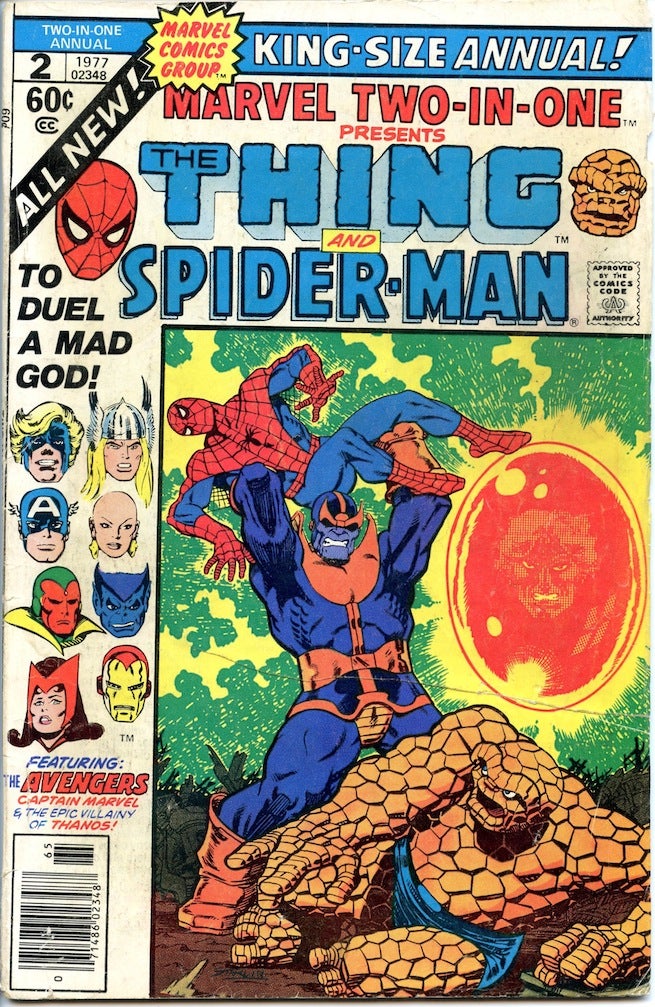 The landmark deal struck between Marvel Studios and Sony Pictures allowing Spider-Man to appear in the Marvel Cinematic Universe opens up a number of storytelling possibilities for the big screen. But given how the MCU has been building ever since the post-credits teaser of 2012's The Avengers, one thing this deal does guarantee if some face time between Spider-Man and the "Mad Titan" Thanos.

Spider-Man, more of a "street level" hero rather than one trying to save the cosmos, has actually had very little exposure to Thanos over the years. But the two have crossed paths on a few occasions, leading to some interesting stories. Here are five of the most notable Spider-Man/Thanos crossovers, just to give people a sense of how these two characters work around each other. 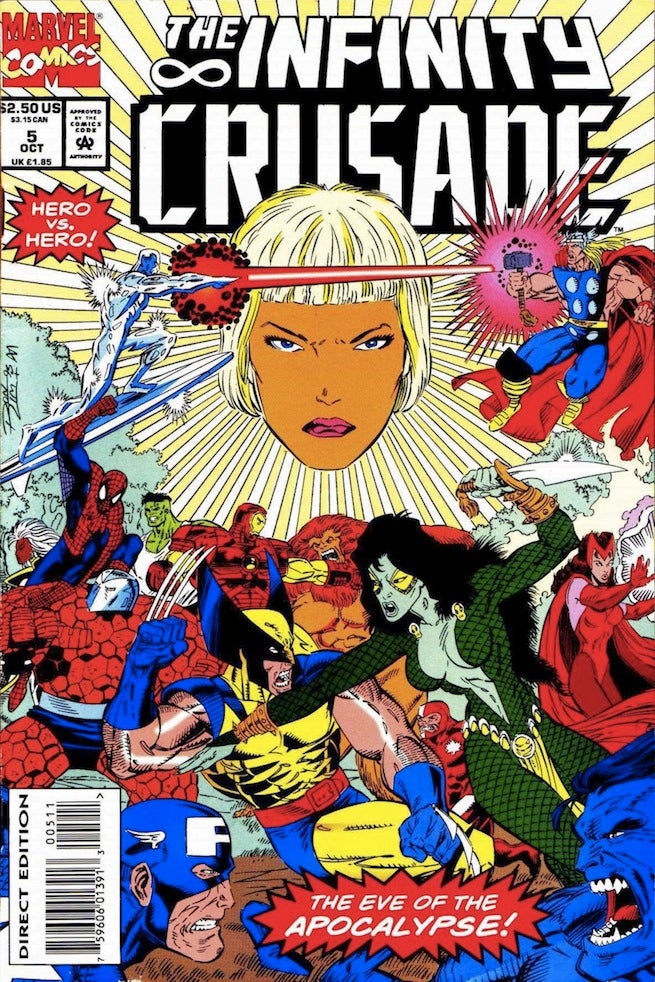 The third iteration of writer/artist Jim Starlin's "Infinity" saga, Infinity Crusade places Thanos and Spider-Man on opposing sides, but not in the way you would traditionally think. This time around, the major threat to the universe is an ideological zealot called the Goddess who brainwashes any Marvel heroes who demonstrates some dedication to religion or a belief structure. So characters like Storm, Thor and Spider-Man (because "with great power must also come great responsibility" is kinda like a religion) are manipulated into being mindless zombies as part of the Goddess's army.

On the opposing side of the ledger are a group of characters that don't have any belief structure beyond empirical facts and figures. So this includes heroes and villains like Reed Richards, Tony Stark and Thanos. So for the purposes of Infinity Crusade, Thanos was a good guy because he didn't believe in anything while Spider-Man was a mindless noob because of his morals and ethics. Needless to say, Crusade has long been considered the black sheep of the "Infinity" family. 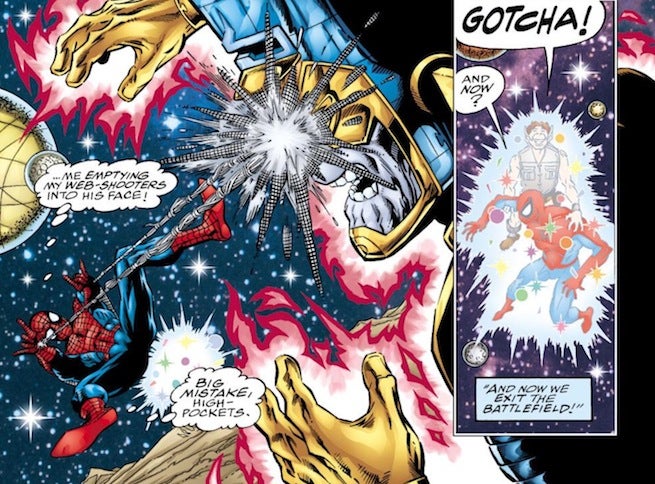 Nearly a decade after his last "Infinity" storyline, Marvel brought Jim Starlin back in 2002 to script and pencil the six-issue Infinity Abyss miniseries. And instead of involving pretty much everyone of significance in the Marvel Universe, Starlin uses a less is more approach, paring down the cast of characters to a select few.

Oddly enough, Spider-Man was one of the Marvel mainstays to make the cut. Not that Spider-Man isn't awesome, but having him play a key role in a storyline that primarily stars all Marvel Cosmic characters like Adam Warlock, Moondragon and Pip the Troll feels a little out of place. Still, Starlin finds a way to make Spider-Man work, and even gives the character a pretty big moment towards the end of the series. It's worth noting that Spider-Man doesn't technically fight Thanos in this series, but rather, five different clones or replicants of the Mad Titan, which were all modeled after existing beings like Professor X and Iron Man. In the storyline's final confrontation, a Thanos that resembles Galactus looks to devour the world, but is able to be defeated by Thanos and his teammates after Spider-Man distracts him (the Thanos-Galactus didn't perceive Spidey to be a threat and thus ignores him). 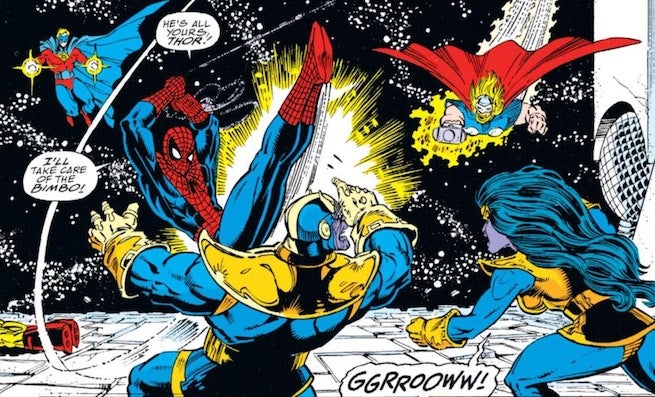 Like pretty much every other Marvel hero involved with the story, Spider-Man doesn't fare all that well during the big showdown with Thanos in Infinity Gauntlet #4 (also known as the "Come get me" issue based on George Perez's amazing cover art). At this point in the story, Adam Warlock has gathered all of the heroes together where, for whatever reason, they decide to one-by-one attack the Mad Titan, who has achieved omnipotent power thanks to his possession of the famed Infinity Gauntlet. Thanos completely decimates the heroes, killing the bulk of them.

Spider-Man ends up being one of the final heroes to attack Thanos during this issue, and gets his head smashed with a rock for good measure. But don't worry everyone, Spidey and everyone else is resurrected by the end of the story in the deus ex machina to top al dues ex machinas. 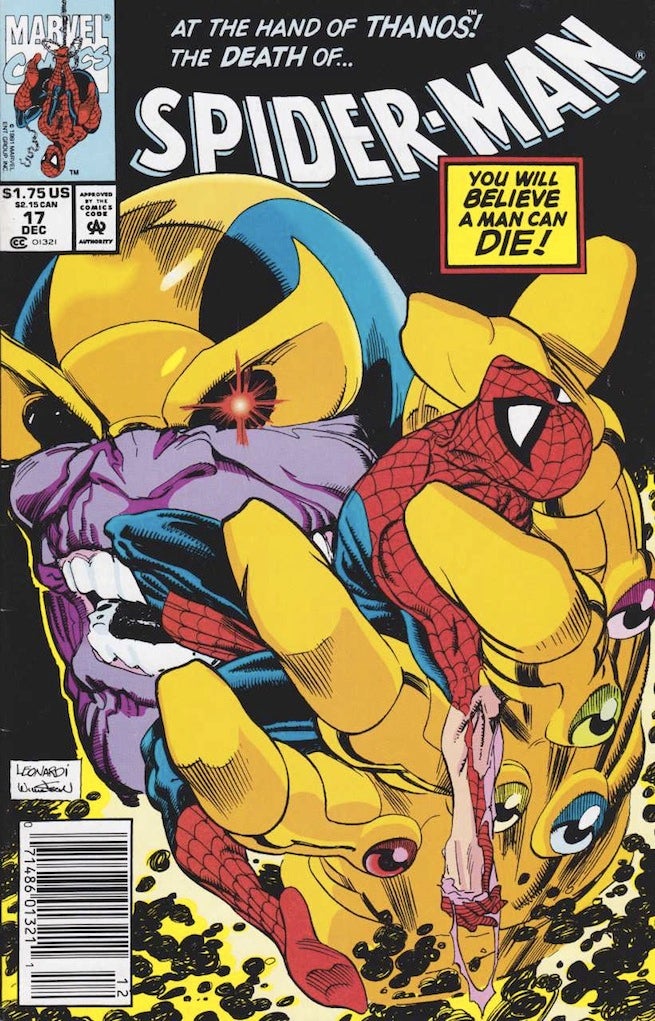 This weird tale by Ann Nocenti and Rick Leonardi from the "adjectiveless" Spider-Man series brings Spider-Man and Thanos nose-to-nose in limbo after Spider-Man is exposed to a deadly toxin while trying to save a mother and her young daughter. Throughout the story, Thanos taunts Spider-Man, telling him that his work as a superhero is pointless and all he does is make other people miserable by attracting more supervillains into New York City. Then to really push Spidey over the edge, Thanos shows him that the young girl he attempted to save is entering his "realm," meaning she's going to die. Spider-Man gets physical with Thanos in an attempt to rescues the girl's soul. That's when Thanos's mistress Death intercedes and for whatever reason, actually sides with Spidey, sending both the hero and the little girl back to Earth where they can go back to living.

This is one of those stories that feels like a bit of a missed opportunity based on where things ultimately ended up. Plus, it's never entirely clear just how "real" the encounter between Spider-Man and Thanos ends up being. Still, this is one of the a very small number of instances where some variation of Thanos plays a prominent role in a solo Spidey book. 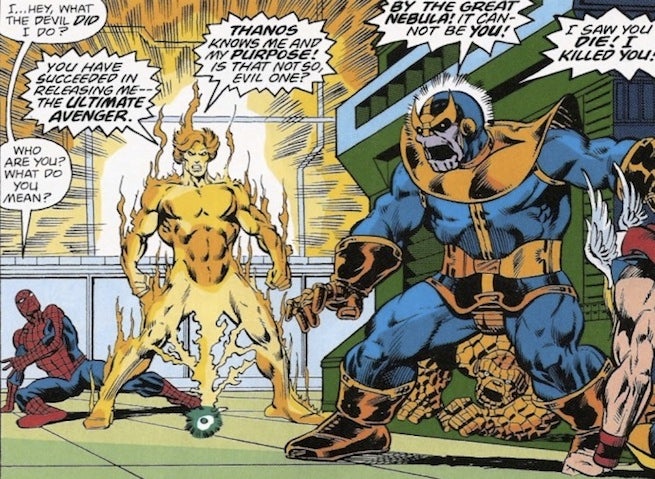 All these years later, the first time Spider-Man fought Thanos remains the best, and most entertaining encounter between the two iconic characters. As the second part of a storyline that kicked off in Avengers Annual #7, Jim Starlin delivers a classic team-up where Thing and Spidey are summoned to Thanos's giant space fortress to try and rescue the Avengers, who were captured by the Mad Titan an issue before. Thanos is able to fend off the attack pretty quickly, leaving Spider-Man with the option to either bail and let "Earth's Mightiest Heroes" figure it out for themselves, or stay behind and likely get killed. Instead, Spider-Man picks "option C," which is for him to recklessly (but intelligently) throw his body at the chamber holding the Avengers in hopes of setting them free and catching Thanos by surprise. He succeeds and the fight is on.

For the icing on the cake, Spider-Man stumbles upon the Soul Gem, which frees the cosmic-powered Adam Warlock. Warlock blasts Thanos with his gem, turning the Titan to stone and restoring peace throughout the universe (at least until Thanos got back on that Death-worshipping horse).