After the conclusion of the “Spider-Verse” event, the Spider-Man comics franchise stands reinvigorated. There are now a total of 6 ongoing series directly related to Spider-Man in some way. Three of these launched during or after the publication of “Spider-Verse”: Silk, Spider-Gwen, and Spider-Woman.  All of these titles have very little to do with the man behind the Spider-Man mask though. They center on characters related to Steve Ditko and Stan Lee’s original creation of Spider-Man in 1962, but they have taken on a life of their own.

Spider-Man only represents a corner or the Marvel publishing line, but it’s an important one representing one of (if not the) best known superheroes in the world. Peter Parker is the star of only one of the six Spider-series currently being published by Marvel, the bi-weekly Amazing Spider-Man. Before “Spider-Verse” Marvel was already publishing Spider-Man 2099 and Ultimate Spider-Man. The heroes in these series were Miguel O’Hara and Miles Morales though. They came from alternate or future timelines in which they had taken up the Spider-Man mantle in their own unique paths to becoming heroes.

Silk, Spider-Gwen, and Spider-Woman all go a step further in that their identities are not taken directly from Peter Parker, but are only tangentially related. They have either selected new alter egos or come from worlds where they were the original “Spider-Person”. Each of these women may be related to Spider-Man through their publishing and marketing histories, but as characters they stand apart. Each of the new series represents something unique within Marvel’s changing line of Spider-series.

Silk follows Cindy Moon, a new character created by Dan Slott and Humberto Ramos as a part of “Spider-Verse”. She was bitten by the same radioactive spider that bit Peter Parker, but was locked away in a fallout shelter for over a decade. Now Cindy has been released and is attempting to remake her life in New York City.

Silk #1, written by Robbie Thompson and drawn by Stacey Lee, introduces a story that is all about the sudden shock of entering adulthood. With minimal experience, Cindy is attempting to both discover her place as a civilian and superhero in New York City. This story is much closer in tone and themes to early issues of Amazing Spider-Man than the current series. Cindy is actively struggling with her identity and responsibilities in the ever-busy Marvel Universe. Peter Parker has grown into his responsibilities over more than 50 years of stories; Cindy is just getting started. Silk is a book that carries the humor, high drama, and wacky villains of classic Spider-Man tales, but it still contains an fresh faced, inexperienced lead character.

Lee’s artwork in Silk marks her as a future star of the American comics scene. She brings her own unique attitude to each page. Action sequences are dynamic and fast-paced bouts, with every panel containing kinetically charged forms. Lee even provides a D-list villain like Dragonclaw the detail necessary to make him a compelling opponent. Her work at places like the Daily Bugle is every bit as well done. Small human interactions exude humor and drama. Silk is not only a showcase for a great new hero, but a very talented young artist. 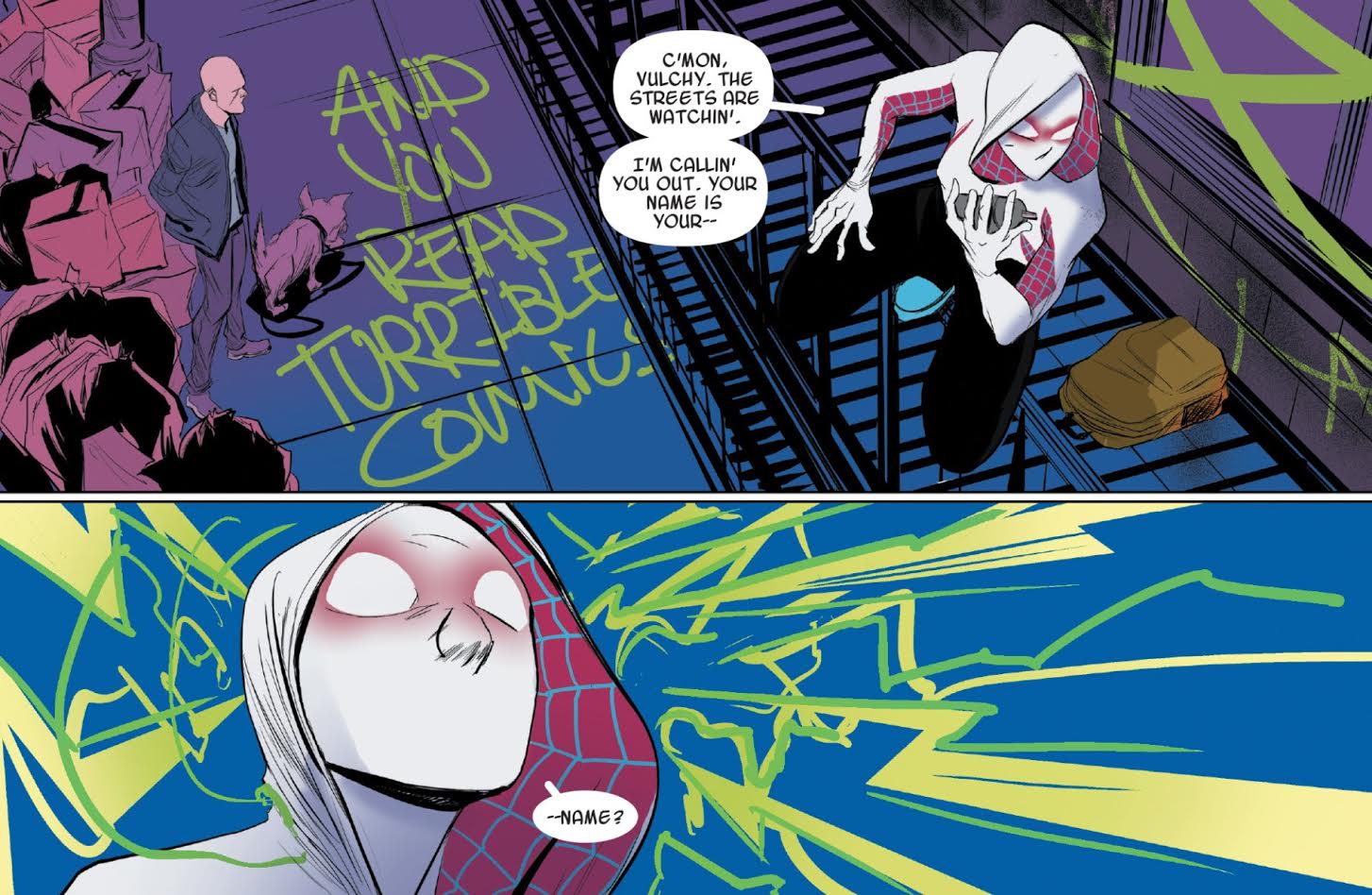 This alternate Spider-Woman, better known to fans as Spider-Gwen, also spun directly out of “Spider-Verse”. Created by writer Jason Latour and artist Robbi Rodriguez in Edge of Spider-Verse #2, Spider-Gwen supposes an alternate reality in which Gwen Stacy was bitten by the radioactive spider instead of Peter Parker. Although she was originally a supporting cast member for “Spider-Verse” alone, the popular reaction to her character supported the launch of a new ongoing series.

After only two issues (and a third coming on Wednesday), it’s already apparent that Spider-Gwen is here to stay. While the chronology of her story is very similar to that of Peter Parker, she’s far from a direct substitute. Gwen is a very different character from Peter or even the Gwen found in Amazing Spider-Man. She’s a musician with a punk attitude, a young woman concerned for her father and bandmates, and a successful student who would rather pursue her passion than responsibility. The same themes of responsibility, self-sacrifice, and discovering one’s identity are all still there but being told in an entirely new way. That sort of twist is present in every aspect of Spider-Gwen as it adds a new spin to characters and conflicts of all sorts from Marvel history.

One of the most invigorating twists of Spider-Gwen is the art drawn by Rodriguez and colored by Rico Renzi. It is a punk rock, fever dream humming with the energy of an amp and lit in bright neon lights. The attitude and style of the art is reflective of Gwen’s personality and sets a striking tone for the entire series. Rodriguez and Renzi established themselves as an incredible pairing on FDP at Vertigo, and are following up with work that only continues to improve here. 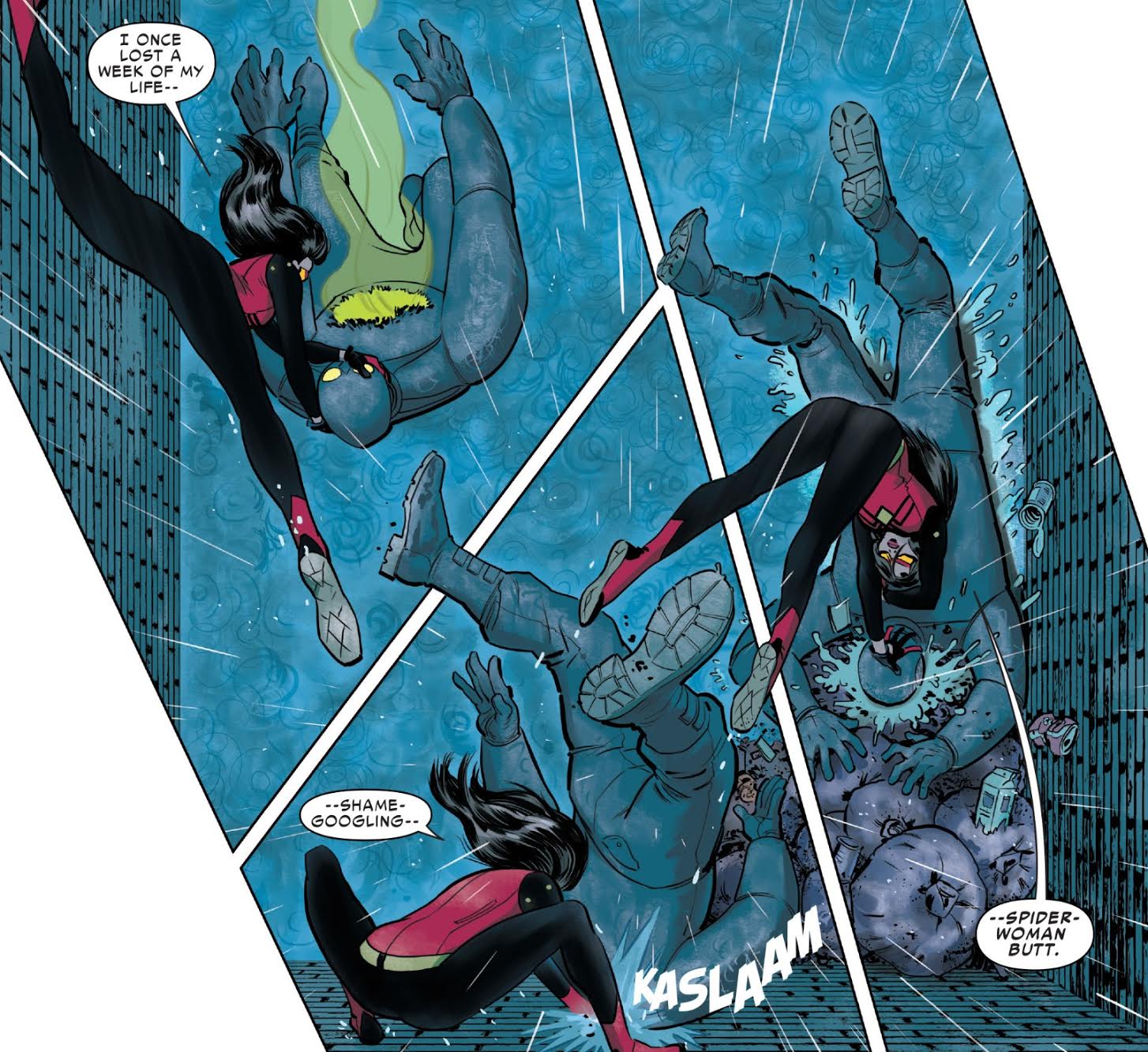 Spider-Woman’s place in the Marvel universe is very different from that of Silk or Spider-Gwen. Unlike the other two, she is a long established character with almost 40 years of history. The newest Spider-Woman series also launched in the midst of “Spider-Verse” as a crossover and with cover and interior artists who fans found to be contentious at best. That has all changed with Spider-Woman #5 though, a comic that reads like a debut issue.

Writer Dennis Hopeless is still on board, but has been joined by Javier Rodriguez on art who brings a brand new look to the classic character. Spider-Woman’s new costume replaces a skintight spandex suit from the 70’s with a more wearable look including a customized leather jacket. This superficial adjustment reflects a much deeper change to the character. It has been decades since Jessica Drew was featured in an ongoing solo title (Spider-Woman: Agent of SWORD was originally planned as an ongoing in 2009, but altered to a mini-series) and Spider-Woman #5 is concerned primarily with defining her without the Avengers or a team-up. Spider-Woman is striking out from her previous affiliations in order to “try living a normal life”. Normal is a relative concept though, and it appears that working as an urban crimefighter and investigator may be as close as it comes.

Rodriguez’s gorgeous new costume design is not the only part of Spider-Woman that looks great. He toys with panel compositions and sound effects in such a way as to make the entire reading experience a joy. He is a comics craftsman with a style that is still entirely his own. Just like Jessica Drew he is showing off the flexibility and potential of someone who has been involved in superhero comics for many years.

Webbing It All Together

So what do all of these new series have in common? The most obvious answer might be related to gender. It’s true, all three new Spider-series are headlined by women, meaning that there is a 50/50 split between all six series currently being published. I think it goes a lot deeper than that though. Looking at Cindy, Gwen, and Jessica, there’s a lot more diversity on display than gender. They represent a cast of characters who are differentiated by their experience, outlook, economic status, race, and more. It is possible to take each of these characters after only a handful of issues and discuss them as multi-faceted human beings.. They are all well conceived characters who go far beyond being women with spider powers.

The art and creative directions of all three series are just as distinct. Artists like Lee, and Robbi and Javier Rodriguez are showing off the incredible diversity of style to be found in superhero comics today. They each have a unique approach to creating characters, landscapes, action, and personal interactions. Whether you’re looking at Spider-Gwen #1 or Spider-Woman #5, it’s impossible to mistake the work of the artists inside.

The diversity found in these three titles, both in their characters and artwork, is hardly limited to those three series alone. Consider the other two Spider-series not helmed by Peter Parker: Spider-Man 2099 and Ultimate Spider-Man. Both Miguel O’Hara and Miles Morales are young men of diverse racial backgrounds, and represent fully formed characters in the same way that all of the women listed above do as well. In fact the only white man to be found in six Spider-series is the original Spider-Man: Peter Parker.

Spider-Man may only be a small corner of the Marvel universe, but it’s an important one. If the work being done by these creators under editor Nick Lowe even hints at Marvel’s direction as a publisher, then it has a lot to say. These Spider-series are representative of a diverse line of characters each with their own story to tell. The response to all of these series, especially Spider-Gwen, goes to show that there is a demand for this shift in direction as well. Spider-Verse was an event that centered around Peter Parker, but exposed readers to heroes of all sorts and produced at least three excellent new series as a result.

There are connections between all of these characters and Peter Parker as well. Spider-Man was the character that defined the teenage superhero in comics. In the first 121 issues of Amazing Spider-Man Ditko, Lee, John Romita Sr., and many others told a quintessential tale of growing into adulthood and accepting responsibility. These are the stories that formed the bedrock of Spider-Man, a character with hundreds of millions of fans. Fifty years later that character has become a responsible adult used to tell very different stories under creators like Slott and Ramos. Stories about growth and adolescence are still craved by readers of superhero comics, and that’s a need being filled by many of the current Spider-series at Marvel.

Spider-characters like Silk, Spider-Gwen, and Spider-Woman are filling the gap left behind by a grown-up Peter Parker; they’re also more reflective of the readers who are interested in comics and superheroes. There’s still a place for Spider-Man and his classic friends like The Human Torch and Daredevil, but there are more opportunities new heroes to join them. All of these women and other new characters like Ms. Marvel and the All-New Ghost Rider represent a new wave of superheroes. They are following in the footsteps of Spider-Man: a hero of the people who reflects our own concerns and worries (while going on fantastic adventures). And as time goes on they are reflecting the men and women who love those adventures better every year.

Spider-Women and The Changing Landscape of Marvel Comics