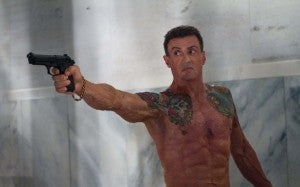 A new trailer has debuted online for Bullet to the Head, a film adaptation of the French crime comic Du Plomb Dans La Tete. The film stars Sylvester Stallone, returning to the comic book adaptation game for the first time since the failure of Judge Dredd more than fifteen years ago.

Stallone is appearing now in The Expendables 2, which opens today, and which he wrote for director Simon West (Stallone both wrote and directed the first Expendables, which brought him back to big-budget action filmmaking after a comparably quiet few years revisiting his Rocky and Rambo franchises.

According to IMDb, the film revolves around a cop and a hitman form an alliance in order to bring down their common enemy after watching their partners die. Dynamite Entertainment has translated the French original for American release.

Thanks to IGN's YouTube page for the embed below:

Stallone's Next Comic Book Movie: Bullet to the Head Trailer