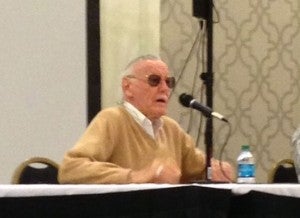 star Andrew Garfield recently made headlines when he suggested turning Mary Jane into a guy and making Spider-Man either gay or bisexual. At Fandomfest in Louisville, Kentucky this weekend, Stan Lee was asked his opinion about Andrew Garfield’s idea.

When it was explained to Stan Lee that Andrew Garfield had suggested that Spider-Man become bisexual, Stan Lee responded, “He's becoming bisexual? Really? Who have you been talking to? I don’t know…seriously I don’t know anything about that. And if it’s true, I’m going to make a couple of phone calls. I figure one sex is enough for anybody.”