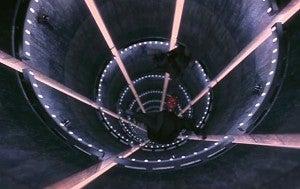 Ray Park, the actor who has played X-Men's Toad and G.I. Joe's Snake Eyes, is arguably best known for his star-making turn as Darth Maul in Star Wars Episode I: The Phantom Menace.

It's a role he'd like to return to, now that sequels to the original trilogy are coming to theaters.

"I've said that I would play anything to do with Star Wars," Park told The Hollywood Reporter. "But really, deep down, I would love to come back as Darth Maul -- that's what I want to do. I would go crazy, go mental, lock myself in a cabin, you know. Do the whole 'method' for two or three months, spear-fishing and stuff, just to play the character again."

The character, who died at the end of The Phantom Menace, has reappeared on the animated Star Wars: Clone Wars, apparently resurrected by request of George Lucas. In the series, it turned out he never died at all but somehow survived the experience of being cut in half and thrown down an endless shaft; he gets around with artificial parts below the waist.

"He is such a dynamic and exciting character," said Dave Filoni, supervising director for Clone Wars, at the time. "He made such a huge impression in that first film that when you go back and look at the prequels, you forget he's not in all three."