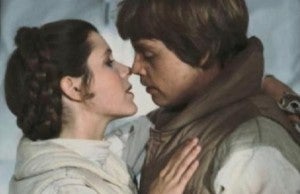 Following up with a source who provided some seemingly-accurate information to them three years ago (that George Lucas would produce but not direct a new trilogy of Star Wars movies in "the next six to ten years," they said at the time), the 3D blog MarketSaw has spelled out a ton of information that may prove to be the first significant amount of information provided to the press about Star Wars episodes VII through IX.

The new e-mail seems to paint this source as a Lucasfilm insider, whereas the prior story read as though it was possible he was just someone who had a business relationship with Lucasfilm.

The information provided by this source falls neatly in line with a number of rumors, including a six-episode outline from Lucas that could take the films through Episode XII and directors like Alfonso Cuarón and Joss Whedon being considered, the latter for a later episode.

All of it sounds no more credible than any of the may other recent rumors, but it's thorough. MarketSaw is convinced, saying, "You can count of this information as being 100% accurate as of NOW. Of course things can change over time, but the main thrust remains."

In a long e-mail provided by the supposed mole, he reveals that, according to the information at his disposal, he suggests that the seventh episode will be called A New Dawn, and that it will revolve around members of the original series cast and their children. He further claims that the films will be filmed from what amounts to polished versions of drafts written around the time of the original trilogy, that there will actually be two trilogies coming, bringing the total number of episodes to 12, all of which will incorporate original trilogy characters and probably cast members.

There's also a suggestion that Mark Hamill is already lined up for the films, which of course is being widely assumed already by a number of fans. Still, Hamill's own comments on the matter are that he was unclear on whether Lucasfilm intended for he and co-star Carrie Fisher to appear in future films when he met with Lucas in August and learned of the new trilogy.

The full text of the e-mail (or as full as it appears in the MarketSaw story) can be found below; judge for yourself its authenticity.

"Disney now has the power to make STAR WARS films, and everything else in the Lucasfilm archives. The movies I told you about are indeed the primary focus. Luke Skywalker is a primary focus, as are many of the original trilogy cast. Disney also realised that George Lucas and STAR WARS are one and the same, so George will certainly have a voice on any angle taken, in fact I believe it's one of many stipulations. However he will no longer have creative control, and as I said before George was already looking at other creative talents to bring his canon to life back before Disney and Lucasfilm really started negotiating (or at least to the best of my knowledge)..."

"Way back when I told you about the new movie trilogy planned, I never explained to you that they were being rewritten from previously secret drafts from way back during the making of the original trilogy. The main problem was the age of the cast, and the tone of the story. Now I do believe that Walt Disney intend on playing to the cultural significance of that original trilogy. You will see a tone more in line with the original trilogy, and specifically featuring that cast, if everything shakes out as intended. Which it will, I promise you.

You can expect to hear more news on the live action TV show in the near future, as the scripts already written will be absorbed in some way into a TV format. The nature of the show and the technical requirements needed to meet a TV budget and schedule are pretty ambitious. Basically they are 45 minute long feature films. With concepts that are very ambitious and the fact that it focuses on characters that are not known and are completely different to what people may have in mind about a STARWARS TV show. This was the problem at the time, and I am pretty sure this is still a problem. At least on the live action front. I am told that soon there will be some kind of material released relating to shot footage and tests on that concept. So look out for that.

I don't believe the empire was completely destroyed by the end of Return of the Jedi.

Luke Skywalker, Han Solo, Chewbacca, Princess Leia, C3PO and R2D2 are I am assured to feature prominently in the new trilogy, as was always the idea. Apparently some have already been approached. Quite a while back too to my understanding. Hamill is a certainty.

There are two trilogies planned, all following an original overview by Lucas, which was always planned as a multi generational saga. Movies 10 - 12 are from my understanding about the offspring of the Skywalkers, set many years later with the surviving cast playing much older versions of themselves and featuring a female protagonist named Skywalker. This is something that I understand is being discussed as the latest trilogy may end up being an amalgamation of the two using themes and ideas from both, but still keeping the general story, also allowing for continuity of cast.

The movies from what I understand will adopt the Harry Potter model, and will be aggressively brought to the forefront of popular entertainment once again with consistent installments. This is just for starters though, especially for those who hold the original trilogy in high regard, they should be happy. You can expect lovingly restored prints of the original trilogy to surface in the near future. That's a no brainer. I along with the rest of the world want those movies in their original glory. Disney are all over that, believe me.

From my understanding the movies that follow will be far more in line with the original trilogy in regards to tone and method, and from the few names I have heard being banded around I am very excited, as they are all choices that I think people will get behind.

- Steven Speilberg, who may actually get to direct his episode of STARWARS after all.

- Alfonso Cuarón, Children of Men, Gravity (which is a masterpiece by the way) When I was told this name, I said that's the guy.

- Darren Arnofsky, The Fountain, Noah. (very popular candidate) and has been for a while.

- Joss Whedon. Serenity, The Avengers. That could work as Joss is currently overseeing Marvels next onslaught under the Disney Banner, but don't hold your breath for a directing gig for many years down the line. He may well have his part to play though ;-)

So very exciting times ahead if you are a STARWARS fan, and especially if you are an original trilogy fan.