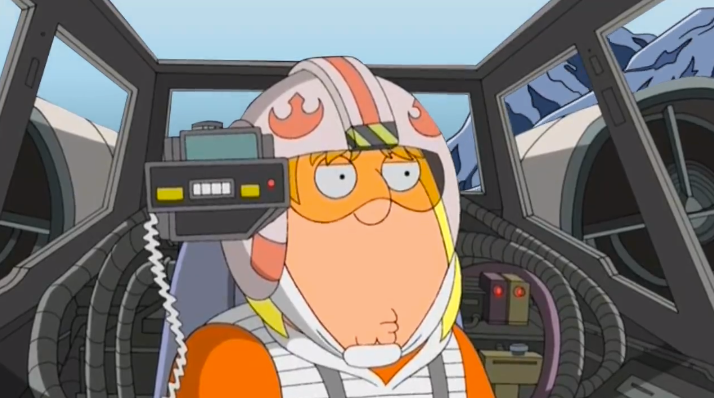 At this point, there has to be more Star Wars: The Force Awakens teaser trailer parodies than there are Star Wars films.

And yet, like the force, they keep on awakening. The latest revision of the ever-popular trailer comes from Seth MacFarlane,(via TBS) creator of Family Guy and Ted. In the trailer, MacFarlane’s characters from Family Guy recreate key figures and moments in the series' style of animation. There’s Peter Griffin as the Millennium Falcon’s pilot, Lois as the mysterious rebel on Tatooine, Chris as the X-Wing pilot, and Joe Swanson as the new rollberball droid, Of course, Stewie is the Sith brandishing the crossbeam lightsaber—though his malfunctions.

This wouldn’t be the first time for Family Guy to parody George Lucas’ space opera. The show has produced three hour-long Star Wars parody specials, called Laugh It Up Fuzzball: The Family Guy Trilogy. The first parody, “Blue Harvest”, lampooned A New Hope, the second, “Something, Something, Something, Dark Side” parodied The Empire Strikes Back, and the third, “It’s A Trap!” poked fun at Return of the Jedi. In those three parodies, Stewie played Darth Vader, Peter played Han Solo, Chris was Luke Skywalker, and Lois was Princess Leia.

Check out the trailer below for the latest bit of The Force Awakens Foolery.

Star Wars: The Force Awakens opens on December 18th, 2015. We wonder how many more parody trailers of it the Internet will produce between now and then.

Star Wars: The Force Awakens Trailer If It Was Done By Seth MacFarlane