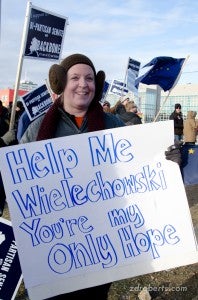 Zachary Roberts, one of our contributing writers and a regular convention photographer for ComicBook.com, something to our attention this evening: In Alaska right now, there are an awful lot of political campaigns that, ahead of tomorrow's election, have been trading on iconography from comics and other geek-friendly popular entertainment.

First up is Bill Wielechowski, who's running for Alaska State Senate. In addition to the supporter pictured here, dressed as Star Wars's Princess Leia, here's how a supporter at that rally described Wielechowski's campaign:

"In the state of Alaska where big oil is the Empire  - Bill is Luke Skywalker. Bill Wielechowski (aka the Best Bill in Juneau) is part of the bi-partisan coalition that holds Alaskan politics together - fought off the nightmare of Sarah Palin and led Alaska into having over a 50 billion dollar surplus.  Wielechowski also has recently been named Vietnam Veterans of America's 'State Legislator of the Year' for his work on veterans issues in Alaska."

Of course, Wielechowski isn't the first politician to compare himself to Luke Skywalker. During his "outsider" campaign in the 2000 Republican primaries, George W. Bush and most of the Republican Party were pretty aggressively anti-John McCain, leaving him to describe his experience pursuing the nomination as similar to Luke's targeting that two-meter vent on the Death Star.

“Remember that the establishment is against us," McCain (the aforementioned Palin's then-future running-mate) said. "This is an insurgency campaign and I’m Luke Skywalker.”

Straying from the Lucasfilm library, though, we find a website that's a little less savvy in its use of the metaphor than McCain or Wielechowski: the Koch Brothers-backed Alaska Family Action's Voter Guide site, which endorses a quartet of conservative politicians for office in the state (including Wielechowski's opponent, Bob Roses), brands them as "The Fantastic Four," complete with the logo and trade dress from Jonathan Hickman's recent run on the comic.

Sadly, there's no clever pitch like Wielechowski's to go beyond the logo, only a matter-of-fact explanation that singles out the four for endorsement: "This year, the Board of Directors has voted to recommend four Senate candidates in particular: Pete Kelly (District B, Fairbanks), John Coghill (District A, Fairbanks/North Pole), Bob Bell (District J, Anchorage) and Bob Roses (District G, Anchorage). "

And, of course, there was Sarah Palin stumping in Superman t-shirts not long ago. Maybe there's something in the water besides salmon.

Star Wars vs. The Fantastic Four: When Geek Culture and Politics Collide (in Alaska)