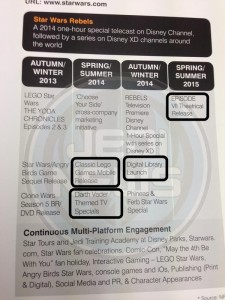 With Star Wars being aggressively retooled for Disney, it appears as though Darth Vader, who died in Star Wars Episode VI: Return of the Jedi, will live on in the form of TV specials.

It's not yet clear what the content will be, or when they will be set (although the most obvious choice is probably between Revenge of the Sith and A New Hope).

The Darth Vader television specials may be animated, may be Lego-branded...nobody much knows yet. Even the fact that they exist is only known thanks to a brochure handed out at a British licensing expo, seen at right and collected by Jedi News.