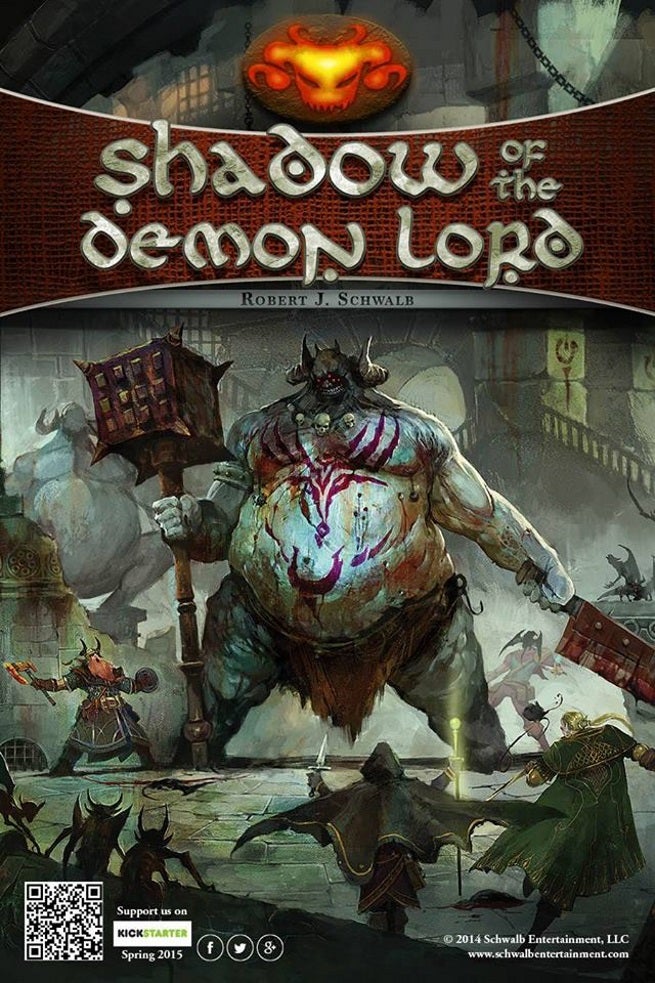 Often, when people think of tabletop roleplaying games, they think of Dungeons & Dragons and Tolkien-esque high fantasy worlds of elves, halflings, and dwarfs. That is not the world of Shadow of the Demon Lord, the new tabletop RPG currently being Kickstarted by designer Robert Schwalb.

“The world is dead; it just doesn’t know it yet,” Schwalb explains. “The game takes place in a crumbling Empire that collapsed under the weight of its own corruption. At its pinnacle, it was a place in reach of an industrial revolution and so it still has guns, clockwork people, bombs, and, yes, the occasional zeppelin drifting through the sky. It has also has magic, demons, cultists, and magic-infused ruins left behind by the vanished faerie folk.”

Over the course of Schwalb’s career, he’s worked on Dungeons & Dragons, the A Song of Ice and Fire RPG, and more. Most recently, he worked on the latest edition of Dungeons & Dragons. Once his work on the project was complete, he had a choice to make.

“My contract with Wizards [of the Coast] expired and I quietly left the company in April 2014. I could have gone back into the freelance pool or I could have struck out on my own. I dabbled in the former, but ultimately embraced the latter.”

Ultimately, it was the siren song of creative freedom that made Schwalb decide it was time to strike out on his own.

“I have worked on major games. I either helped design them or helped to produce many sourcebooks for them. I’m proud of it all, of course, yet I often felt constrained by the product. And rightly so. Working on existing and venerable games means grappling with decades of cannon. Working on licensed games means having to color within the lines. So when I wrapped up my commitments to Wizards, I felt the time was right to do my own thing, to create something that was all mine, hatched from my imagination, using rules I would create. Part of this was to prove that I could do it, make a complete game with a system unbound by preconceptions. Part of it was because I couldn’t help myself.” 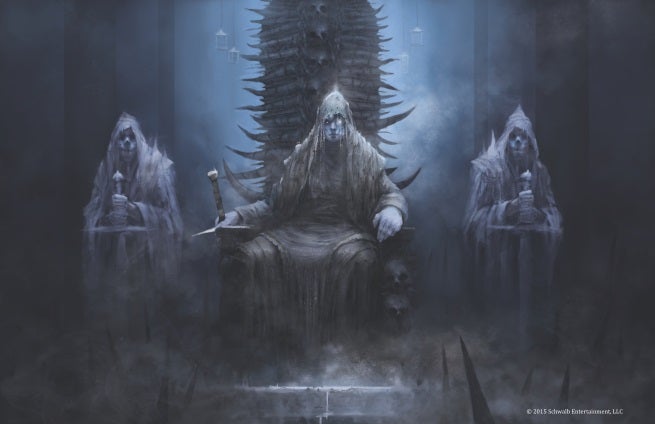 Thus, Shadow of the Demon Lord was born, with the titular entity helping to create a unique world to adventure in.

“Much of the troubles source from a being known as the Demon Lord. A cosmic destroyer, it lurks in the gaps between universes, always searching, always pressing to escape into the mortal world. The game suggests the Demon Lord has cast a shadow on reality, a shadow that spawns a multitude of horrors.

‘The [game master] decides what effect the shadow has. It might unleash a global pandemic, corrupt magic, cause the dead to rise, afflict great swathes of people with madness, or loose Demon Princes from the Void to lay ruin to the landscape. The effect—the Shadow—can be something that changes during a campaign, a constant menace, or something that hangs around in the background like that demon from Insidious.”

So that’s where Shadow of the Demon Lord takes place, but how does it play? Schwalb intent in designing the game was to create a system that provides rules when you need them, but doesn’t let them get in the way of the story.

“The game puts story in front of the mechanics,” Schwalb tells us. “You use the game rules when you come to spots in the story where you need them to decide what happens next. When your character attempts to kick in a door, it happens, provided it seems reasonable. If it doesn’t—maybe the door is reinforced with a bar or there’s a lot of stuff going on in the background, the GM might call for a roll. Once the situation resolves, the game snaps back to the story mode.

“To keep the mechanics streamlined, the game uses a d20 and a d6, though it’s helpful to have a few 6-siders on hand. Like other games that use a d20, the big die helps you figure out whether a described activity—an attack, dodging—happens or not. You use the d6 for damage rolls and to modify the d20.”

These rolls can be affected by character stats and earned boons and banes, which provide extra bonus dice to roll. While the rolls can be used to determine all sorts of situations, they become most prevalent during the games’ fast-paced combat.

“Combat is the place where the rules show up the most, but combat runs fast,” Schwalb explains. “I took great steps to keep options straightforward and easy to implement. One way was to eliminate initiative. The game just assumes the PCs go first and in any order they want. You can resolve a battle in just a few rounds and rounds move by quickly. Once you’re done, the rules slink off and sit in a corner until you need them again. For much of the game, the players roleplay their characters and describe those characters’ activities. The GM interprets their actions and describes the outcomes.”

While Shadow of the Demon Lord has dark fantasy at its heart, Schwalb says that much of the games’ tone and style will depend on who is sitting at the table.

“Really, the play experience really depends on the characters,” he says. “Starting characters are quite fragile, on par with what you would expect to play in a Call of Cthulhu game and adventures are more focused on investigation and exploration. Should these characters encounter hostiles, the best strategy is often to run. Expert characters, however, have more toys to play with, more resources at their disposal, and thus can take some punishment. Such characters might face gauntlets like those you might find in Diablo, battling through disturbing and deadly environments.”

Schwalb launched the Kickstarter for Shadow of the Demon Lord on March 12, with a $30,000 goal. That goal was met within seven hours. Now, less than halfway through the campaign, that goal has been more than doubled, with over $60,000 raised. The extra funds have unlocked stretch goals like increased page count for the core rulebook, additional supplemental PDFs, and adventures by well-known game designers like Monte Cook, Bruce Cordell, and Chris Pramas, but there’s still more goals the meet. You can contribute to the campaign by visiting the Kickstarter page and donating to ensure you get your copy of Shadow of the Demon Lord.

Step Into The Shadow Of The Demon Lord With Robert Schwalb