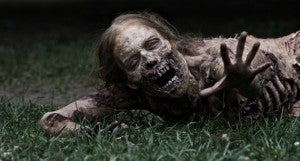 Not long ago, back when his The Shawshank Redemption and The Mist collaborator Frank Darabont was running the show, legendary horror writer Stephen King told Entertainment Weekly (where he also writes) that he was in line to co-write an episode or two of AMC's The Walking Dead with his son Joe Hill, creator of the comic book Locke & Key.

King said at the time that Darabont had tagged them for an episode in the second or possibly third season, but between seasons one and two, Darabont left the show.

Bleeding Cool, however, has it on good authority that the familial writing duo (who recently announced their intention to write Road Rage for IDW Comics) have opted out of the gig.

Only two highly-rated weeks into the hit show's second season, a source close to the show has told Bleeding Cool that any chances of Stephen King working on the show, shambled away alongside his friend Darabont. Since the only confirmation ever came from King personally and not the network, it's safe to say that no contract was ever signed and the relationship simply evaporated before it was ever official--but it's still unfortunate. King's take on the zombie apocalypse in Cell was surprisingly good, and it might have been interesting to see what he could have done in Robert Kirkman's playground.

Stephen King Shambles Away From His Walking Dead Episodes