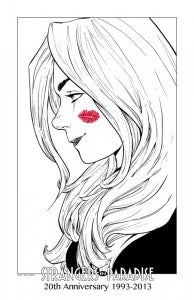 Fans of the hit series knew it was coming sometime, but today Terry Moore unveiled the official art for the Strangers in Paradise 20th Anniversary Tour and the release date for the Strangers in Paradise Omnibus paperback. A 20th Anniversary print, seen at right, features Katina Choovanski (Katchoo), one of the two stars of the series and the "face" of the franchise to most fans. That same image appears on the front of a 20th Anniversary Tour t-shirt, on the back of which are the dates for Moore's 2013 comic book convention appearances. The Omnibus, a two-volume, 2,400-page monster, comes in a slipcase and includes an exclusive, 6.5" by 10" Strangers in Paradise print. At $100, that's less than half the cost of the same volume in hardcover (a product that's no longer available, as it sold out years ago and was a limited run). The paperback edition will be available in July, in time for San Diego Comic Con International. Fans who pick it up at San Diego or Baltimore will be able to avoid shipping--but it's a pretty heavy item, so unless you've got some room in your luggage, you might end up paying extra to bring it home anyway. The complete tour schedule, as told from the back of the t-shirt, can be seen below. 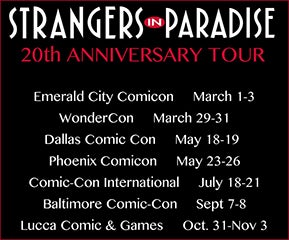