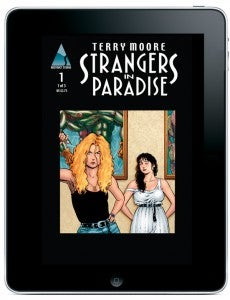 Moore, whose current series Rachel Rising launched on the platform back in March, followed it up by releasing all thirty issues of his sci-fi series Echo shortly thereafter.

Strangers in Paradise is celebrating its twentieth birthday in 2013, and will do so with the release of a new prose novel starring the series's characters. Some familiar faces from the long-running book will also guest-star in Rachel Rising in the coming months.

“ComiXology fans already know and love Terry’s current Rachel Rising horror series and have devoured his recently concluded Echo sci-fi series, but we’re more excited than ever to bring the work that put Terry Moore on the map with today’s debut of Strangers in Paradise ,” said co-founder and CEO David Steinberger. “With the perfect mix of humor, romance and drama, Strangers in Paradise is an amazing read for hard-core comic fans and new readers alike, and we’re honored to bring the entire amazing work to our world-wide audience.”

The series was announced along with Rachel Rising, but has taken a while to get live digitally because of the size and scope of the series.

Strangers in Paradise Comes to ComiXology