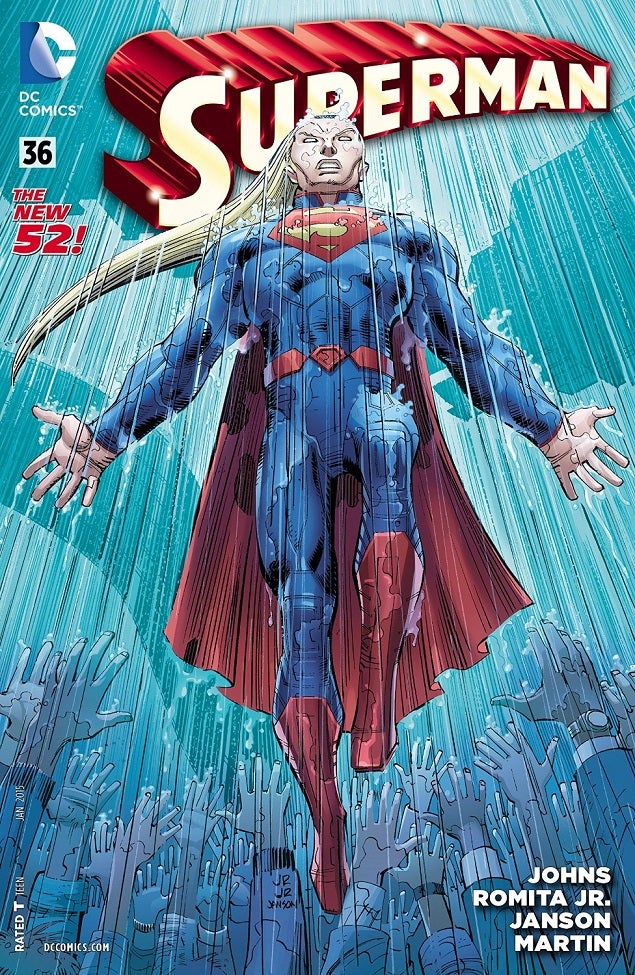 Superman #36 represents the big turning point in Geoff Johns, John Romita Jr., and Klaus Janson's first story on the title: "The Men of Tomorrow". It is exhibited as a shocking twist and major reveal. That sort of presentation is common in superhero comics, but it rarely lives up to the hype. This is an example where the twist falls flat and fails to present something that is actually subversive or interesting.

Johns' story for Ulysses took a very interesting turn at the end of Superman #35 when he offered to take six million people from Earth with him to live in a genuine paradise. The choice to abandon Earth (and any hope that things will get better) is a challenge to the very core of Superman's character. It is an interesting test of Superman's values and calls his importance into question; it's an opportunity to explore what makes him a great hero. The twist of this issue is that this plotline is promptly tossed aside in favor of a simpler challenge that can be solved with brute force. Superman is no longer under pressure to answer questions and create a clever resolution when he can simply punch an obvious villain until the problem goes away. The closest Johns' script comes to addressing the ideas it previously raised is to have Ulysses and Superman stand in a field and shout platitudes at one another for two pages. It's not only a boring scene, but one that only scrapes the surface of the actual conflict at play.

This also begs the question of why did the Machinist sub-plot exist? It was initially a learning opportunity, a chance to show Superman's values and develop Ulysses. Everything done in this issue renders those moments to be farcical, existing only to make this story long enough to fill an overpriced hardcover.

Romita Jr. and Jason's artwork varies from page to page and panel to panel. At their best, they create dynamic scenes filled with depth. For every striking panel, there is an example of one that lies flat on the page telling the story, but failing to do much else. Janson's inks are incredibly important in developing Romita Jr.'s loose and fast pencil work. Some pages come across with incredible force; sharp speed lines tearing at forms and characters moving clearly through space. When alien forms are shown scooping sick, begging people from the street, they are portrayed in a truly frightening manner.

It appears that either a rush to meet deadlines or a lack of pencil work leaves panels that are lacking in detail or proper perspective though. Characters will often appear in the background with only a few scratches to define their outfit. Other times a long room or landscape will lack a defined horizon and lie flat on the page. That rushed feel in many pages leaves one to wonder what kind of product could be delivered given a more extended schedule to structure these impactful fights and enormous set pieces.

The biggest visual disappointment of Superman #36 is the appearance of the ships from the fourth dimension. Romita Jr. applies Kirby Krackle to his pages and charges everything with energy. That alongside the title of fourth dimension begs comparison to the work of The King himself (as did the advertisements for this series that promoted Romita Jr. coming to DC Comics in the exact same manner as ads for Kirby in the 70s). These ships make it clear that Romita Jr. is no Kirby, not even close. They appear like a collection of cylinders covered in Venetian blinds in two bland colors. There's nothing powerful or dynamic about these machines that loom over Metropolis.

Superman #36 is a Superman story that follows the basic model and shape of most other Superman stories spread over six or more issues. There's a bad guy threatening Earth who Superman will need to punch very hard to stop. The script and visuals both pretend to have depth and majesty that simply is not there. It's an unremarkable superhero story that becomes a victim of its own ego and hype.