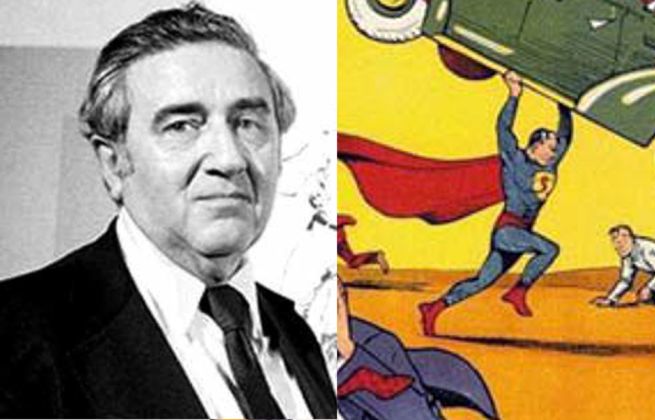 Jerry Siegel, the writer who co-created Superman in the 1930s, was born one hundred years ago today, on October 17, 1914.

An inductee into both the Jack Kirby and Will Eisner Comic Book Halls of Fame, Siegel was 24 when Action Comics #1 was released, exposing the world to Superman and changing both his life and the face of American comics.

After working on a science fiction magazine and writing strips both for his school paper and on spec for publishers around the country, Siegel and his friend and artist Joe Shuster made the jump to mainstream American comic books in 1935 with More Fun, where they would introduce, among other things, Doctor Occult, a character who still exists in the DC Universe.

Siegel and Shuster would work on Superman for a decade before suing for a share of the rights. Ultimately, the pair became inadvertent precursors to the creators' rights movement as they continued to engage in litigation over the rights to the characters for years, finally receiving a significant payout in the '70s (although even that would not permanently end the conflicts). Siegel would write Superman periodically, both credited and uncredited, throughout the first thirty years of the character's existence.

He continued to work in the industry on and off for decades, and in fact was offered (but declined) the opportunity to write the final story in the saga of the pre-Crisis on Infinite Earths Superman, which would eventually turn out to be Alan Moore's enduring classic Whatever Happened to the Man of Tomorrow?.

In the course of his career, he created more than 50 characters, including most of Superman's main supporting cast as well as stand-alones like The Spectre. He worked for DC, Marvel, Archie, Charlton and Aardvark-Vanaheim, among others, and for a time wrote the beloved Italian comic Topolino.