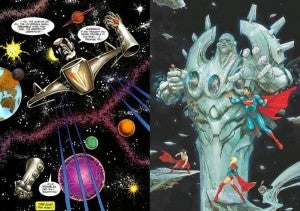 While there's been quite a bit of speculation as to the real origin and identity of H'El, the Kryptonian villain at the center of Superman's big crossover, this week's issue ended with a big reaveal that the living monolith known as The Oracle may not be as...passive...as many fans assumed from its rather "zen" look in previews.

The disembodied head and hands, the armor and the elaborate shoulder pads, in fact, reminded us of another cosmic-level Superman villain from the past: Dominus, a "psionic, cosmic phantasm" who had an origin with ties to Krypton and the Phantom Zone, displayed many of the same powers that H'El has used during his battles with Superman and Superboy.

Introduced at the tail end of the years-long run on the Superman titles by creators like Dan Jurgens, Louise Simonson and Stuart Immonen, Dominus also had connections to the all-seeing Kismet, something that could explain his role as The Oracle. The character, so far, appears to be fulfilling a role similar to that of Pariah in the pre-Flashpoint DC Universe...except with a lot more power and over 80% less perm.

Dominus also liked to call himself "The Destroyer of Worlds," which sounds awfully similar to "The World Killer," what H'El called one of his weapons.

Would Scott Lobdell use an updated version of Dominus? Does anyone at DC even remember him? The answer, probably, is no; the character was the big bad pulling the strings during the much hated Superman: King of the World story. Still, the design similarities and similar scales and uses of powers seemed worth taking note of.

Superman, H'El on Earth and The Dominus Connection

When is WWE's Next Draft?