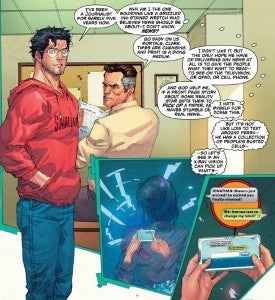 The big Superman news this week was that Clark Kent quit his job at The Daily Planet in Superman #13. Clark Kent went on a Jerry Maguire style rant, saying “I am not the only one who believes in the power of the press- -the fact that we need to stand up for the truth. For Justice. And yeah- -I’m not ashamed to say- -the American way!”

Well, it turns out Clark Kent quitting really wasn’t the most shocking scene in Superman #13. There was a far more shocking scene in the issue, but it hasn’t gotten as much attention, because it wasn’t leaked to the mainstream media as an exclusive story like the quitting scene.

In Superman #13, Clark Kent potentially breaks the law by spying on Lois Lane’s text messages. Superman uses his x-ray vision to read a private text conversation between Lois Lane and her boyfriend Jonathan. Jonathan texted, “Movers just arrived! So excited you finally relented!” Lois Lane texted back, “Not too late to change my mind?”

And it’s not that Superman didn’t know what he was doing was wrong. Just before he spied on Lois, Clark Kent thought, “I hate myself for doing this. But it’s not like Lois to text around Perry- -he has a collection of people’s busted cells- -so let’s see if my x-ray vision can pick up what’s- -“

Since Clark Kent didn’t have Lois Lane’s permission to read her private text messages, it would be considered illegal in many states. It’s possible that Superman might live in a state where there are no laws against eavesdropping, but even so, what he did would still be considered kind of creepy.

The fact that Superman has x-ray vision and seems willing to use it to invade other people’s privacy also is concerning for his future career in journalism. By power of the press, does that mean Superman will use his super powers to gain information that traditional journalists will not have access to?