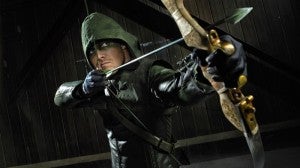 producers Marc Guggenheim and Andrew Kreisberg may have to give up on one of their dreams--and the Superman vs. Batman movie is at least partially to blame.

"We've heard the fans and we're very well aware that they would like to see Nightwing and various other Bat-characters on the show," the pair told Digital Spy. "[But] that is a little bit out of our control, [and] I think [that movie] announcement made it a lot more out of our control!"

The announcement, of course, was made at last weekend's Warner Bros. panel at San Diego Comic Con International. The expected Man of Steel sequel will see Superman take the screen alongside--and apparently square off against--Batman.

Arrow, then, apparently isn't invited to--or declined an invitation to--the larger DC cinematic universe that the films are reported to be building, otherwise it wouldn't be such a clear-cut thing that having Batman appear on the big screen precludes his cast appearing in Arrow.