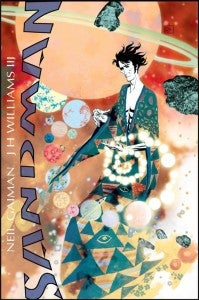 Last month, ComicBook.com noted with some skepticism that the entertainment press was still reporting a Sandman film as being in development. After years in development hell and a number of different takes between television and film, it seems as though the film is more or less lost at sea and while it's entirely plausible that it could find its way, it didn't seem likely that a mention in the background of a different story would be the way we heard about. Well, at South by Southwest, Neil Gaiman addressed this when asked about his American Gods miniseries for HBO. According to LeakyNews, here's how the exchange went between Gaiman, The Big Bang Theory producer Chuck Lorre and the audience.

What's the status of the American Gods TV show? Neil Gaiman: [HBO are] waiting very patiently on the third draft… of the pilot. Sandman is completely and utterly owned by DC which is Warner Bros. May go over to the big screen or stay with Warner Television. They don't tell me. Chuck Lorre: I work there; maybe I should talk to someone Gaiman: You should do! Lorre: I'll talk to someone. Sandman should be on a screen.

In addition to this exchange, Gaiman confirmed that he's not only working on his next installment of DC's The Sandman, but also on a new Neverwhere story titled "How the Marquis Got His Coat Back."

SXSW: Neil Gaiman Has No Idea What the Status of Sandman Movie Is

My Hero Academia Reveals New Voices For One For All