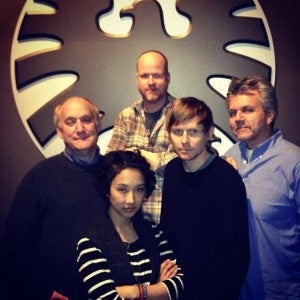 Following today's screening of Much Ado About Nothing, filmmaker Joss Whedon and others involved with the production of the movie held a Q&A session at South by Southwest in Austin. "It's about the people who didn't win that lottery and aren't heroes in that world," Whedon told a fan when asked about the upcoming S.H.I.E.L.D. movie, according to a Twitter user who was there. That should go over well with comic book fans, who have long maintained the need for a TV adaptation of Gotham Central, a comic with a similar premise. He was otherwise categorized as pretty tight-lipped about the project, although he did say a bit more than that to Deadline yesterday. "[The pilot] was fun to do, but again, too much work," Whedon said in a pre-SXSW interview. "The idea of the Little Guy is something that I am very fierce about, and there has never been a better Little Guy than Clark Gregg. That intrigued me, this world around the superhero community. It's the people whose shop windows get blown up when the Destroyer shows up. It's the more intimate stories that belong on television that we can really tap into the visual style and ethos, and even some of the mythology, of the Marvel movies. I think we've put together another really great ensemble headed by Clark. And how much it's actually seeding or hinting or reacting to what's going on in the movies is something we'll let play o'ut as we go. For me the most important thing is that people fall in love with it on its own merits, rather than constantly asking, "Is there gonna be an Avenger?' Well, there's not gonna be a Hulk because that guy's too expensive." He added of his role on the series, "I will be as involved as I can be – mostly on a story level. On the TV show I can say, 'No, do it my way.' I'm just trying to keep it exciting and meaningful and surprising." But the most important question, answered today at SXSW, was what he thinks of the finished project. "Sucks," Whedon joked, shooting leading man Clark Gregg a look.