Released for new comic book day, the six pack makes history as the first case of beer to also tell a sequential art story. Each bottle’s label contain comics panels that tell a story across the entire six pack. But this story is no Coors Light of comics. Renowned comics writer Jason Aaron and iconic "Walking Dead" artist Tony Moore pitched in for a zombie-western tale that’s as crafty as the beer inside.

Brewing it all together is Arcade Brewery co-founder Lance Curran. A warehouse director for Threadless by day, Curran and his co-founder Chris Tourre have spent the past several years launching both their budding beer company and the six-pack story. While most microbreweries make their beer first, then style their artwork and packaging after, Arcade does it backwards. They want the art and story to inform the beer, making for a brew that no Wednesday Warrior could resist. Here, Curran spoke with us on how 6-Pack Stories came to be, his philosophy on comics and beer, which comic characters he’d like to share a brew with.

To start, could you tell us the Secret Origin of this beer? How did 6-pack Stories come to be?

I’m a huge comic book guy. I have a pull list that I grab every week, and I’ve been reading comic since I was a kid. Almost any project I do, I try to incorporate comic books into it. And with my job at Threadless I work with different comic book artists on t-shirt designs. Tony Moore was one of the first comic artists to work with me on some comic-themed T-shirts. We were also working on a video together called “Welcome to Zombie Town With Tony Moore,” for Threadless. And right around the time we were filming, I started working on the brewery with my partner, Chris Tourre. I started talking to him about the idea of the brewery, and asked him if he’d be willing to be involved. He was super excited about it. That’s a thing I’ve found with a lot of comic book artists and writers: They’re hungry for the chance to work on something different outside of usual medium and have a new challenge.

Tony was really into the idea and volunteered to help kick it off. He brought Jason Aaron on board. Then we came up the idea for the six pack, and to have a comics story unfold across six bottles of beer. Beer and comics just seem to go together.

Interesting. Why do you think beer and comics go together so well? Why not wine with a comic, or a cocktail?

Beer always has a good story behind it. It’s very community-based and conversational. Just like a comic, a beer has a lot of pieces that create the story, and there’s so many little things going into beer that makes it an art form. I think there are way more similarities than people think. It’s something that draws fans together. I know that when I go to different conventions, beer is what brings people together after the show. And every week, after I go to the comic shop, I pick up a beer that pairs well with what I’m reading. That was really the basis of my idea for Festus Rotgut.

So what type of beers go best with the comics you read? How do you pair the two?

I more of a horror comics reader, so I like a nice dark beer. Either a porter or a stout go well for a horror comic. So a book like Crossed, which is pretty violent, always requires a beer with a higher alcohol content.You need to get on the same level that the comic is. (laughs)

No doubt. So how involved were you with the story’s development?

I never want to get in the way. I always want the creators to do their thing, so Jason came up with the script and gave it to Tony and I. I thought it was perfect, and Tony just went from there. I was actually pretty worried about the approval process. I thought the Alcohol and Tobacco Tax and Trade Bureau, who puts in all of the federal approvals for the labels, would not approve. The comic has some bad words, and some violence that I was expecting them to reject, but they didn’t. We didn’t have to make any changes to the story or Tony’s artwork.

And where did the idea for a Zombie Western story come from? Was it because you were working with Tony, who’s made a name for himself in zombie and horror stories?

Back when we first hatched this plan three years ago, I think the idea was that zombies and beer just go well together. It was Tony’s idea to do something a little more niche, and have the old cowboy incorporated into the zombie story.

But as a brewery, we always wanted to base the beer off of the story or the artwork. Most breweries come up with the beer, then create the label and artwork around that. So our process was a little backwards, with the art informing the beer. We really wanted to create a full experience, and ask “How will the beer’s flavor complement this story?”

To wrap up, who’s the one comic book character you’d share a beer with?

I’ve actually thought about this before, and I always go back and forth. But I have three choices. The first person that comes to mind is Wolverine, because you always see him drinking. But at the same time, he’s probably not a fun guy to drink with. He’s always grumpy. So the second guy that comes to mind is John Constantine. I think he’d be a fun guy and a good drinking partner, but he’d probably screw me in the end. Spider Jerusalem is really the guy that I’d spring for before anyone else. He’s one of the most interesting characters in comics. He’s the closest thing comics have to Hunter S. Thompson, who is someone that I’ve always wanted to have a drink with. I think I’d actually enjoy that beer. 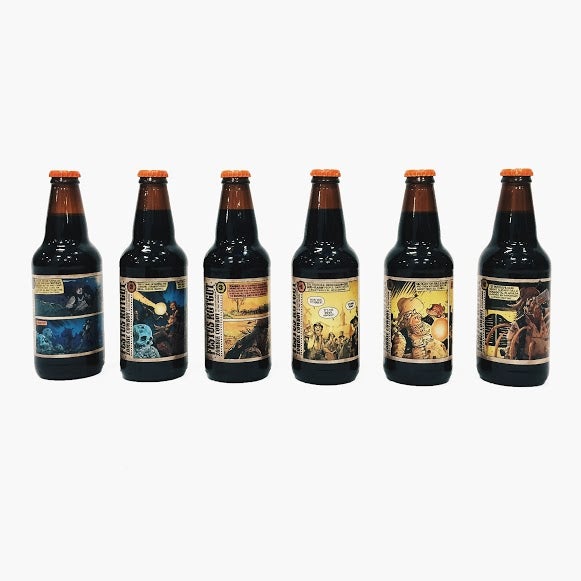 Perfect. So is there anything else that you wanted to mention about the brewery or 6-Pack Stories?

We’re planning to do 6-Pack Stories annually, but we’re also doing other comic related releases with different comic creator. For C2E2, we’re going to partner with a popular webcomic for a beer release. We’re not ready to announce what that is just yet, or who’s involved, but it’s coming.