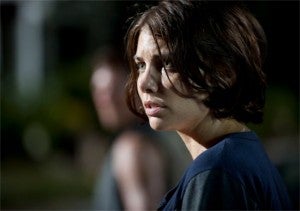 After tonight’s “Arrow on the Doorpost” episode of The Walking Dead, there is an hour long Talking Dead. Chris Hardwick is the host of the Talking Dead, and some of the questions he will be discussing tonight are “about Maggie and Glenn’s relationship,” “about Andrea’s loyalty to each group,” and “about life back at the prison after Rick, Carl and Michonne’s return.”

Also, Lauren Cohan, who plays Maggie on The Walking Dead, will be appearing. Of course, some are already speculating that Lauren Cohan’s appearance could suggest that Maggie might not make it through tonight’s episode of The Walking Dead, as cast members often show up on the Talking Dead after they get killed off.

Fortnite: Wolverine Trailer Released, How to Beat Him and What You Get