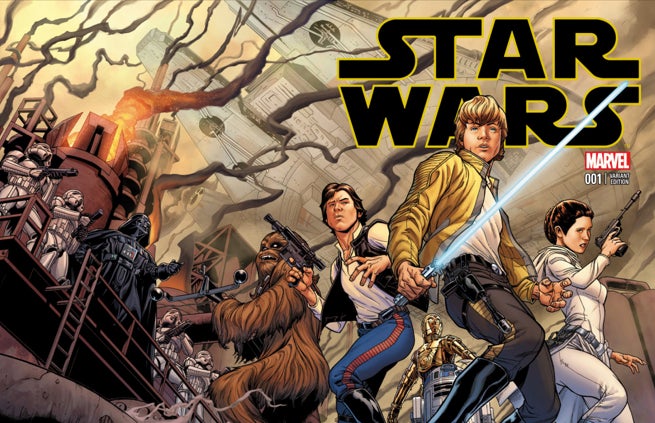 Marvel begins their foray into all-new Star Wars today with Star Wars #1. With Jason Aaron writing and John Cassaday illustrating, the series chronicles the events of Luke, Leia, Han, and—of course—Darth Vader in between A New Hope and The Empire Strikes Back.

To say call the series a major moment in comics history would be a Death Star-sized understatement. Not only is this Marvel's first Star Wars title in almost thirty years, but it's also the first Star Wars comic set in the original trilogy's continuity in about the same span of time. Even Lucasfilm got on board for this one, ensuring that every detail, down to an X-Wing's wing span, fit perfectly into George Lucas' universe. Add the comic's record breaking sales numbers, which top a million, and a new Star Wars film later this year, and you have the trappings of a pop culture event.

At the eye of this storm is Jordan White, a Marvel Comics editor who's led the project from its Padawan days until now. Working directly with the creative team, the brass as Lucasfilm, and more, White is as crucial to the series' success as Yoda is to Luke. It makes for a busy schedule, but White was gracious enough to pull himself out of the galaxy far, far, away and discuss the series' direction, key details on the first issue, and what fans can look forward to in future issues.

Warning:This discussions contains major spoilers for Star Wars #1. Make sure you pick up and read the issue before moving any further.

The issue opens right in the middle of the Rebel's next attack on the Empire. What made you decide to re-enter the world of Star Wars at that specific moment, in that specific place?

It's just a really exciting moment. It's them on a mission. It's them getting into the action and getting into another attack on the Empire. Since they achieved a victory against the Death Star, they're keen to keep their advantage going and take down the Empire as fast as possible. They want to keep it up. So, having them on a mission seemed like the most exciting way to reintroduce ourselves to the characters instead of just seeing them hang out in a base somewhere.

Which character you enjoying working with so far? You're working with the classic all-star cast here, but which one has really pleased you?

Well, of course they're all a pleasure. But C-3PO is my favorite character, so I was really pleased to see Jason nail his voice down. But the fact is, Jason nailed all of their voices incredibly well. Han Solo especially. I think people will be really excited to hear Han sounding exactly like he should. He sounds exactly like himself. Everything single thing he says, you'll go, "Yep—that's him. That's the real Han Solo."

What type of stakes or scenarios are you trying to build for these characters in the series. We obviously know where they have to ultimately end up, so how are building your story with those parameters in mind?

The fact that we're taking place before Empire does mean that you Luke Skywalker isn't going to die. That being said, there's a lot of exciting twists we can throw into this story without killing characters off. One of the things that we thought about the most for this series was how the characters are different between A New Hope and Empire Strikes Back. If you look at it, there are quite a few ways in which the characters are different. So we're asking, "What events occurred that made them that way?" It's a dark time for the rebellion at the beginning of Empire, but they literally just won their biggest victory ever at the end of Star Wars. So there's a lot of unexpected moments that we can make happen without having to resort to killing off a main character.

And how far do you have this chunk of Star Wars cannon planned out? After this mission concludes, will the series jump to other characters at this moment in time?

So what was it like learning that this book was going to make history and set records with its million-plus copies sold?

I found out a while before it was announced, and the first time it was mentioned to me, I absolutely thought it was a joke. I laughed. But Marvel was like, "No, we're serious. We think we can sell a million copies." And I was like, "What?! You have to be kidding!" And from there, it just went to pure jubilation. Getting that many copies of the issue out there, that means that so many people will have an opportunity to read it. I'm so proud of this comic. It's so well done, and everyone is at the top of their game. The team really nailed the Star Wars vibe, so I'm thrilled to have more a million copies out there. I want to have as many people see it as humanly possible.

When you found out that it was going to sell over a million copies, did it change your mental approach at all? Did you feel more nervous, or excited about the project?

Sure, it made me nervous in the sense that the pressure was on to make the book is good. But that being said, that pressure was already there in a major way. This is Star Wars, and if you don't do Star Wars well, people aren't going to forgive you. So, it definitely added to it, but the pressure was already well-amped up. That said, I think everybody rose to the occasion. Reading the script, I knew Jason absolutely got it. And going a tour with John through the Lucasfilm archives and seeing how much he loved Star Wars and was into the models, designs, props, and costumes, you could tell that he was going to be able to bring a gorgeous look to this book and capture that Star Wars feel. Laura Martin's colors look beautiful, and Chris Eliopoulos lettered it perfectly. I think everything just came together really well on this one.

So, who's idea was it to have Luke confront Darth Vader so early in the series? Right off the bat, you guys just dove right into the big moments.

[Laughs] Yeah, that was definitely Jason. Oh, man. Wait til you see how that one goes. It's pretty terrific.

And was it Jason too who dreamt up the scene with Darth Vader using his Storm Troopers as human shields via the Force? That was pure villainy.

Yeah, I loved that part. And again, that was all Jason. Jason has so many awesome Star Wars ideas that fit perfectly into this universe. You're going to see so much cool stuff in this arc, and beyond. Every time I get an issue in from Jason, I cue up the soundtrack, push play, and start reading. It's the best Star Wars world you have ever seen outside of those movies.

Interesting. So how would you say this Star Wars series is different from what Dark Horse published? What makes Marvel's Star Wars a unique comic experience in that universe?

We knew that we would be working with Lucasfilm's story group to ensure that this series is official cannon. That's not to say Lucasfilm is giving us the official story—far from it. We're telling them what we want to do with the story, and they're giving us the approval to do it. But we know that we're telling an official Star Wars tale that falls in line with the movies. Then of course, we have the industry's top talent tackling this series. When I said these guys were at the top of their game, I meant it. They're doing the best work of their careers here.

And this isn't to say anything against the Dark Horse material. Those are some really fun comics, but I think we're kicking it up a notch. It's going really well.

That relationship between Marvel and Lucasfilm you cite is interesting, and now that you mention it, I remember seeing their story editors credited along with Marvel's editorial team. So, what has your relationship with Lucasfilm been like through the series' creation? What has the creative process with them been like?

They're involved with us every step of the way. We sent them the story, and they let us know if it works within Star Wars cannon or not. They send us notes on the, whether they be technical or larger notes about the universe, like "this planet works this way." And if they do have a story note, where they think it might work better in the Star Wars universe, then they'll send it to us. They do that for the scripting and they do that for the art. They take a look at everything and at every stage of the game to make sure we're making the most Star Wars-y thing we can.

Awesome. So moving forward into future issues, are there any moments you can tease fans with? Who's going to have the biggest moment?

That's a tough one, but I think Vader gets the best moments in issue #2. And that's saying something, because there are a lot of great characters in there. But, man. Vader is pretty impressive. He's going to get his own book and everything, but he's still a formidable villain in the main book as well. For fans of Darth Vader, there's going to be no shortage of him around.

Anything else you wanted to mention?

Nope. I'm super excited, and I'm really glad that people like it. I hope they keep coming back for more.

Fantastic. Thanks for the time, Jordan.

How Eternals Made Makkari's Super Speed Different From DC's the Flash