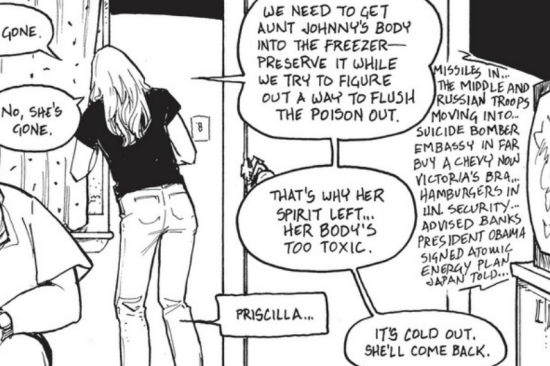 As part of our ongoing commentary track-style column "The Whatdead," taking a look at his Eisner-nominated series Rachel Rising, acclaimed cartoonist Terry Moore told ComicBook.com that he's hoping that his new Strangers in Paradise prose novel will bring some things from comics to the prose form and help him expand the toolkit available to all writers. Asked about a particular device he used in this month's Rachel Rising--something that really only works in comics--Moore opined, "It's not a prose device, but I would love to introduce a few new devices to the form" in his forthcoming Strangers in Paradise novel. 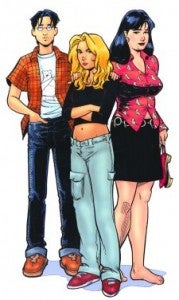 The device in question, as pictured above, is a creation of a kind of buzzword-filled white noise that Moore often employs when TV--especially TV news--is on in the background of one of his panels. Rather than allowing the reader to see the part that's "important" and then effectively muting it, as is commonly done in comics, Moore generally elects to keep a patter going in the background, as if the reader were in the room with the set. Usually, though, the report is difficult to follow, since he's trying to communicate a sense of being in a room where that's neither the most important thing going on, nor the thing you'd be paying attention to. Moore added, "I felt like I added a few things to the cartoonist's toolbox. It would be nice to find an enhanced way to write that pulled the reader into a deeper experience. That's what fiction hopes for, isn't it?" Moore has been generally mum about the actual subject matter of Strangers in Paradise, which he had hoped to have finished by December to coincide with the award-winning comic's twentieth anniversary. He was unable to do that and still keep Rachel Rising on its schedule, though, and is currently aiming for a 2014 publication for the novel. Check back tomorrow afternoon for our full commentary with Terry Moore on Rachel Rising #20.

Terry Moore on the Strangers in Paradise Novel: I Want to Add to the Writer's Toolbox