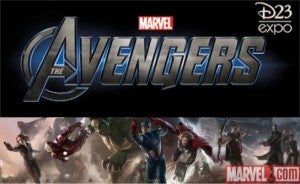 Wondering why Marvel Studios didn't have a huge The Avengers movie cast panel at the 2011 San Diego Comic-Con? It looks like they were saving it for Disney's D23 Expo. Of course, this shouldn't come as a huge surprise considering that Disney now owns Marvel Comics, and the Avengers Movie cast can provide a huge event for their expo, which takes place from August 19th through the 21st at the Anaheim Convention Center. There are actually going to be two Marvel events taking place at the 2011 Disney D23 Expo. The first event is that Marvel Studios President Kevin Feige will assemble the Avengers cast members on Saturday, August 20. According to an announcement by Marvel, Marvel Studios President Kevin Feige will join Rich Ross, Chairman, The Walt Disney Studios; Sean Bailey, President, production, The Walt Disney Studios; and John Lasseter, Chief Creative Officer, Walt Disney and Pixar Animation Studios on stage at the D23 Arena for the Expo's Walt Disney Studios presentation. In addition, there will also be what is described as "an awesome assemblage of cast members from Marvel's The Avengers." The Avengers movie stars Chris Evans as Captain America, Chris Hemsworth as Thor, Scarlett Johansson as Black Widow, Jeremy Renner as Hawkeye, Robert Downey Jr as Iron Man, Mark Rufflo as Bruce Banner (Hulk), and Samuel L. Jackson as Nick Fury. The second event is a panel with Marvel Chief Creative Office Joe Quesada on Sunday, August 21. Quesada will conduct a special Marvel presentation with a Q&A and a behind-the-scenes look at Marvel. According to Marvel, the event will take fans "through the evolution of Marvel from its first comic book in 1939 to its current position as one of the most important creative forces in the world."

The Avengers Movie Cast To Assemble At Disney's D23 Expo