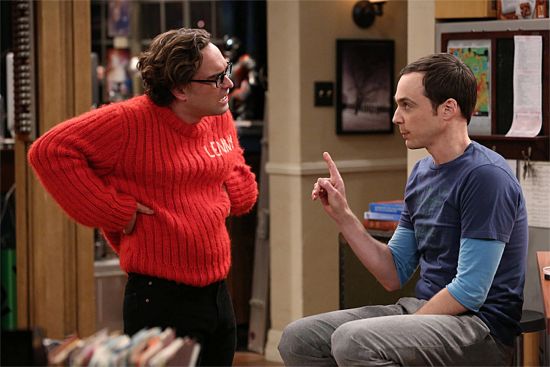 CBS has released two sneak preview clips from tonight’s episode of The Big Bang Theory, which is titled “The Itchy Brain Simulation.” The first clip is a montage of various scenes from the episode, teasing Sheldon asking Leonard to wear an itchy sweater.

In the second clip, Sheldon asks Leonard to wear a specific sweater until a matter is resolved between them. After some badgering, Leonard agrees to wear the sweater. Then, Leonard tells Sheldon that he’s heading down to the video store to return a DVD (which is likely the source of their dispute), but Sheldon says that he forgot to tell Leonard that the store went out of business years ago.

In “The Itchy Brain Simulation” episode, Leonard tries to keep Sheldon from overreacting when a past mistake comes to light, but Sheldon punishes Leonard by making him walk a mile in his shoes.  Meanwhile, Penny confronts Raj’s ex-girlfriend, Lucy.