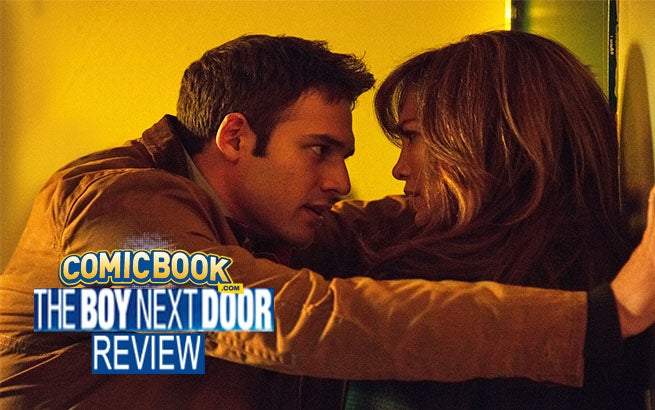 Claire Peterson (Jennifer Lopez) is a high school teacher who lives alone with her less-than-popular teenage son, Kevin (Ian Nelson). Her husband (John Corbett) has been forced, by her, to vacate the house after being caught in an affair with a younger girl from San Francisco.

Life hasn't been easy for her lately. Everything is a reminder of her marriage issues and living alone without a man in the house is tough. Then comes Noah Sandborn (Ryan Guzman), the orphaned nephew of Claire's next door neighbor. Right when Claire couldn't hold the busted garage door open, Noah comes in, triceps flaring, to raise it up for her and immediately befriend her son.

As Noah starts hanging around with Kevin, he and Claire realize their similar interests in poetry and fine arts. They even finish each other's sentences. Thing is: he's 19. Oh, and she's still married. Like I said, though, the broken marriage is taking it's toll on her and she is weak. Noah, the big, strong, handsome boy next door jumps on the opportunity to be her night in shining armor (also offering Ryan Guzman the luckiest role in recent history) and make her feel like a beautiful princess.

Well, one things leads to another, and all of those things lead to regret- for Claire, at least. Noah becomes obsessed, possessive, manipulative, and downright crazy about Claire. The movie becomes an intense thriller that takes turns you wouldn't expect from watching the trailers. Director Rob Cohen does not shy away from violence with guns, knives, and more. He even found a way to incorporate some of his Fast & Furious experience with a car stunt.

Jennifer Lopez is a big debate on the web. I, for one, support her. I think she is talented. I'm not going to compare her talent to anyone else or say she's the best, but she gives an impressive performance. When Claire is weak, J.Lo truly looks broken and hurt. When she is scared, she genuinely looks terrified. The damsel in distress role wasn't a bad one for Jennifer, especially when she got to throw a little bit of attitude at Ryan Guzman in a couple scenes.

Kristin Chenoweth wasn't why you went to see this movie, but she's what you'll like most. She manages to steal the screen in what screen time she has, integrating expositional conversations smoothly and providing comic relief to a film that needed it, because sometimes there were laughs where there should have been suspense.

Then, there's Ryan Guzman. He was probably cast because he has abs and looks like Theo James, but he ceased the day. Moving from the Step Up franchise to his is, well… a big step up, in my opinion. It's a completely new audience and a lot of pressure. He handles it, though. His transition from innocent boy next door to psychotic, manipulative killer may not have been perfect, but I don't blame him for that. I see that fault to lay on the writers and directors. Nonetheless, he played two completely different people in this movie and played them with ferocity. He was convincing and scary as a ruthless, psychopathic stalker. The conniving looks he delivered to the audience were second to none.

Bottom Line: The Boy Next Door is nothing new, but that doesn't mean it's not good. It walks the line between horror and thriller, and maybe meshes them at times, creating a crazy intense (maybe over-the-top) third act. 6.7/10

The Boy Next Door Review: Love Your Neighbor?