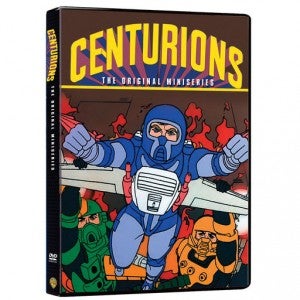 The Warner Archive, a print-on-demand DVD service operated by Warner Brothers Home Video which has in the past featured such fanboy-friend films as Steel, Legends of the Superheroes and Doc Savage, has made The Centurions: The Original Miniseries available for purchase at their website. The 1986 cartoon and its toy series have been largely forgotten by all but the most committed of its fans, and according to a quick search of Amazon appears to never have been released on VHS during its heyday, making the December release not only the first DVD, but the first time any of the show's episodes have made it to the home video market at all.

The point of the Warner Archive is to release films which may not have enough of an audience to support a large print run and a broad release, but which fans and cinemaphiles have requested enough times for Warner to feel making them available is a good idea. Like they have done in the past with TV shows, The Centurions is not the full series (which ran for another sixty episodes in the late '80s) but rather the original miniseries that ran in 1986 as a test balloon for the briefly popular kids' show and toy line. Like the original plan for the series--which had this mini launched to see whether a longer format show could be plausible--it's possible that a strong performance at the Warner Archive level could lead to more releases of additional episodes down the line.

"In the near future Doc Terror, and his cyborg companion, Hacker, unleash their forces to conquer Earth! Only one force can stop this evil: a handful of brave men. In specially created exoframes, they can be transported anywhere to fuse with incredible assault weapon systems, beamed down from the space station Skyvault, becoming man and machine, Power Xtreme! Max Ray, brilliant Sea Operations commander. Jake Rockwell, rugged Land Operations specialist. Ace McCloud, daring Air Operations expert. Whatever the challenge, they are ready—the Centurions!" Debuting as a 5 part mini-series, and enjoying contributions from three of the greatest action artists of the 20th Century – Doug Wildey, Gil Kane, and Jack Kirby – The Centurions promised to pack a punch – and it delivered! Get ready for mad machine action as 3 masters of land, sea, and air do battle with a mad inventor for the fate of a planet."

That's the way the Warner Archive describes the series, which in addition to Kane and Kirby also featured comics icon Gerry Conway as a writer (although that was after this initial story was finished). As a child of the '80s, I have fond memories of these toys--with just over zero points of articulation but holes all over them to accommodate trading accessories on their armor--and was briefly surprised to discover a connection to Jack "The King" Kirby, but when you look at the character sheets with a critical eye his influence can certainly be seen.

The show itself is better than I could have expected, too, with a strong narrative flow to the episodes collected on the DVD that tells a larger story without any one episode feeling like it lacks resolution. Most '80s cartoons--especially ones like this and The Inhumanoids, which seemed to come out concurrently with their toy lines--tend not to have aged well. After all, G.I. Joe was a show after the toys were already a success and just about every cartoon since the form was created have made a mint on selling plastic versions of their leads--but when you release the two at the same time, you're essentially banking on the idea that kids will love the toys enough to watch the show, or love the show enough to watch the toys. that kind of scattershot approach often yields mediocre products on one or both end, as the philosophy allows for a pickup of lost consumers in the other medium.

THE CENTURIONS: THE ORIGINAL MINISERIES Now Available Through Warner Archive