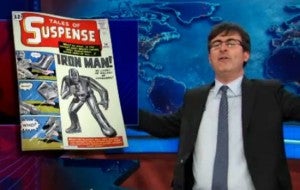 On the Wednesday, August 14 episode of The Daily Show, interim host John Oliver lost it over an inaccurate media statement about Iron Man.

Oliver added, "This is basic fact-checking! These kind of mistakes have to stop! This is a catastrophic error!"

Check out Oliver's full rant about the subject in the video below.