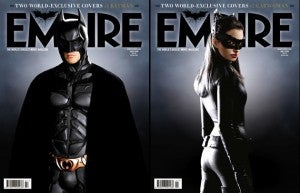 Before The Dark Knight Rises was ever written, a new feature in July's Empire magazine tells readers that the studio already knew who they wanted to serve as the film's villain, and it wasn't Bane: Warner Brothers wanted The Riddler, last seen onscreen as a villain in Batman Forever (the third film in that franchise as well), according to an entry at Batman-News.com.

The studio also reportedly wanted Leonardo DiCaprio to star in the film, which is interesting because while he went on to star in Inception for The Dark Knight Rises director Christopher Nolan, that hadn't yet happened by the time these requests were being maken by Warner.

This information all comes via an interview with co-writer David Goyer, who was of course instrumental in seeing to it that these things never happened--unless, of course, there's a rather massive surprise waiting in the wings.