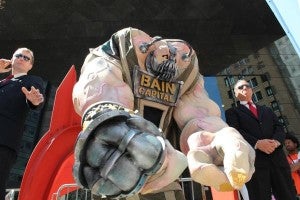 Back in July, a handful of left-wing activists started making some hay out of drawing parallels between Bane, the Batman villain at the center of the then-upcoming Christopher Nolan film The Dark Knight Rises, and Bain Capital, an investment group for which Republican Presidential candidate Mitt Romney worked during the '90s.

The comparisons were short-lived for a number of reasons, among them the fact that the Aurora theater shooting seemed to suck all of the fun out of trying to use the Batman film for political gain, and the fact that Rush Limbaugh got involved. After an on-air rant about the topic that just about everybody interpreted as Limbaugh determining the whole film was a piece of liberal propaganda, he became the object of derision for a few days, saying that he had received more e-mail and Twitter corrections about his Batman misconceptions than about any substantive issue in a long time.

“Do you think that it is accidental that the name of the really vicious fire breathing four eyed whatever it is villain in this movie is named Bain [sic]?” reads his show’s official transcript. He went on to elaborate that “a lot of people are gonna see the movie, and it’s a lot of brain-dead people, entertainment, the pop culture crowd, and they’re gonna hear Bane in the movie and they’re gonna associate Bain. The thought is that when they start paying attention to the campaign later in the year, and Obama and the Democrats keep talking about Bain, Romney and Bain, that these people will think back to the Batman movie, ‘Oh, yeah, I know who that is.’”

Well, expect Rush to be back behind the bully pulpit today; a protest yesterday brought back the old Bain/Bane gag, in the form of a 13-foot puppet manned by Occupy Wall Street protestors and used in a protest by Occupy and United New York (a labor group).

"We want to bring these super-villains out of site and into the open," said Gan Galan, Occupy Wall Street Puppet Guild artists who created the giant Bane, according to The Huffington Post. "The Republicans also sent a giant, bloated puppet to give a speech in Tampa: Chris Christie."

Occupy, ironically, was the group that Bane's co-creator Chuck Dixon, one of the best-known and most outspoken conservatives in comics, singled out as being more similar to Bane's own characterization than any conservative group.

“As for his appearance in The Dark Knight Rises, Bane is a force for evil and the destruction of the status quo," Dixon explained in a July interview with ComicBook.com. "He’s far more akin to an Occupy Wall Street type if you’re looking to cast him politically. And if there ever was a Bruce Wayne running for the White House it would have to be Romney.”

The Dark Knight Rises: A Bane vs. Bain Rematch