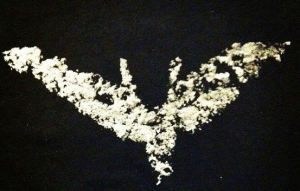 Do those chalk bat-signals on the walls in The Dark Knight Rises trailers mean that John Blake really is Robin? That's what Forbes seems to think, with a new blog post pointing out that the similarity the logo bears to Dick Grayson's Nightwing logo (particualrly the DC Animated Universe iteration of it) is simply too close to be a coincidence.

It also seems like it could be notable that Kyle Higgins, who writes Nightwing for DC Comics these days, told our Panel Discussions podcast back in August of last year that the decision to change Nightwing's logo from blue to red--bringing it more into line with the Joel Schumacher movies as opposed to previous iterations of the comic books--was one made far over his head for reasons unclear to him. If they were going to introduce the character in a movie that's full of closely-guarded secrets, that doesn't seem like an unreasonable move for the publisher to make (although why they would want it to look more like Schumacher's version is unclear).

Forbes also points out, perhaps less convincingly but certainly emphatically, that the chalk logo looks less like a bat and more like a bird when turned upside-down. When charged by readers to "prove" that it's Blake who draws the logos to begin with, the writer was unable to do so, but stood his ground, seeming to indicate that he has inside information on that particular point.