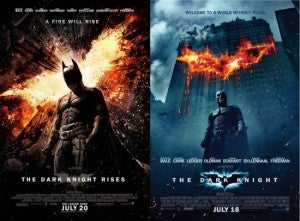 In spite of stumbling out of the gate relative to expectations, The Dark Knight Rises has performed consistently well and has long been expected to eventually eclipse The Dark Knight in terms of its bottom-line take. Not only have pundits and industry observers been taking for granted that it would happen, but Warner Brothers has said as much themselves.

This weekend, The Dark Knight Rises opened in Italy and the Italian-speaking portions of Switzerland, marking the final market in which it will roll into theaters. It's been over a month since the film was released in the United States and it's domestically almost a non-factor at this point.

With more than $40 million to go before it can surpass its predecessor and no more big opening weekends to fall back on, is it even possible for The Dark Knight Rises to eclipse the $1 billion mark and become the highest-grossing Batman film of all time?

Probably, but it's far from a sure thing.

This week, from Sunday to today, the film will likely have made somewhere in the neighborhood of $8.5 million, about a 40% drop from last week. Assuming a similar drop next week, that brings another $5 million and change from just the U.S. and, without even considering the foreign markets, puts the film near $970 million worldwide. Expecting only $35 million from all other markets, including somewhere the film has been in the theaters for far less time, doesn't seem particularly unreasonable. Still, when you consider that a strong opening weekend in most other countries is something like 10% of what it is here in the U.S., it doesn't instill a huge amount of confidence.

Of course, it's somewhat ironic that final box office fate of The Dark Knight Rises will rest with overseas ticket sales; it's already surpassed The Dark Knight internationally, and it's really just a matter of whether a brisk business in other countries can help it overcome the huge gap between what the two films have made domestically.