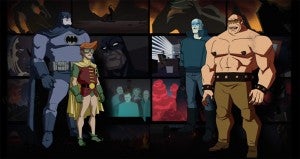 On the Blu-Ray and DVD copies of Superman vs. The Elite, which went on sale yesterday, DC Entertainment and Warner Premiere included a featurette focusing on the upcoming, two-part feature film adaptation of Frank Miller and Lynn Varley's classic The Dark Knight Returns.

"It's a pretty big, sprawling story," DC Animated Universe honcho Bruce Timm said of the decision to spread out Miller's miniseries over two films. "We knew early on that if we were going to do it, we were really going to need some extra room."

Featuring over 12 minutes of animatics, behind-the-scenes material and static shots from the comics, the featurette shows off very little finished footage but still manages to give a pretty good sense for what kind of film director Jay Oliva (whose DC history includes directing episodes of Young Justice and Green Lantern: Emerald Knights) is trying to make.

Starring Peter Weller as Batman and David Selby as Commissioner Gordon and more, Batman: The Dark Knight Returns Part One is due out on video in November with the sequel coming in early 2013.

The Dark Knight Returns Featurette Unveiled on Superman Vs. The Elite DVD