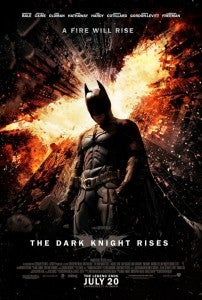 An emotional appearance by Christian Bale, Gary Oldman and Joseph Gordon-Levitt of The Dark Knight Rises led into a ninety-second sizzle reel for the film, made up largely of new footage, or different uses for old footage.

While earlier reports were that MTV was not planning on making the video available, they've got it live right now at Batman-News.com. Check it out here, and then scroll down for a few thoughts on what we just saw!

Snowblower Strikes Back by 2012TDKR

"The Legend Ends" is not just a tagline.

"Every great story deserves a great ending," Nolan told the audience just before airing the clip, "And The Dark Knight Rises is our best possible attempt to put a great ending to this story onscreen."

For a while there, it was hard to guess whether "the legend ends" and all this talk of finality was just about this group of guys getting ready to move on from the franchise, but recent comments seem to suggest--and that quote all but confirms--that there's more to it than that.

Whether there's any credibility to rumors that Batman may die in the film or not, and whether it's a happy ending or not, one thing seems clear: Nolan is not approaching Batman as the open-ended, serialized story comic book fans know and love; rather, he's crafting a story that will be a beginning, a middle and an end and which will likely not tie into whatever the next Batman movie is that Warner Brothers makes.

We may have seen the breaking of the bat

A vicious kick delivered by Bane to Batman, which cut off abruptly to go to the next scene, may well be the blow that turns the tide of the film if fan theories are to be believed.

Either way, the two separate showdowns--one in a dark, cavernous place and one on the streets of Gotham City--seem to support the theory of a first fight that doesn't end well for Batman--in case all those shots of Bane carrying a broken mask, coupled with the footage of him talking trash to Bruce Wayne, weren't enough for you.

Gotham is a No Man's Land

Not only are we treated to the images of bridges being detonated--something we've seen before--but now there's also footage of the tunnels being blocked by stacks of crushed and mangled cars (including some police vehicles).

This means that, like in the comic book story No Man's Land that reportedly inspired at least part of the film's plot, there's no way into or out of Gotham and that when war breaks out between Bane's army and the GCPD, anyone still on the island will be trapped in the middle.

There's no love for Bane from Catwoman

Is she a hero? Is she a villain? That question has been bugging us ever since Catwoman was first announced, but at least here it seems obvious that she's not working with Bane--and that if she ever did, it was a long time ago and she's very unhappy about it.

She's seen being interrogated by John Blake of the Gotham City Police Department and fighting alongside Batman, but never face to face with the criminal mastermind who throws the city into chaos.

Catwoman and Batman will work together

Back up there a second: She's clearly working with Batman in a couple of shots. Chased by Catwoman, a man rounds a corner and almost bumps right into Batman, who's hanging upside down from the structure they're walking on, Spidey-style. This, paired with images that appeared to show the two fighting side-by-side in a previous trailer, more or less cements that at some point in the story, Catwoman's moral grey area will shrink and she'll be a full-on good guy (or at least Batman will believe she is).

See anything obvious we missed? Chime in below or visit our forums!

The Dark Knight Rises: Five Things We Learned From MTV