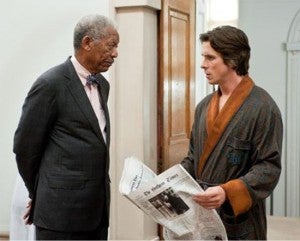 The Academy Awards might have snubbed The Dark Knight, but Warner Bros. wants to make sure they don’t make the same mistake with The Dark Knight Rises. Well, ok, the Academy didn’t completely snub The Dark Knight, as Heath Ledger posthumously  won a Best Supporting Actor Oscar for his portrayal of The Joker. There were also a couple other nominations in visual effects and some other categories.

However, the Academy failed to nominate The Dark Knight for Best Picture and failed to nominate Christopher Nolan for Best Director, so the perception is still there that the Academy failed to give The Dark Knight its proper due. In fact, the backlash was so huge about The Dark Knight missing out on a Best Picture nomination that the category has actually been expanded to allow a wider range of films (and by wider range we mean movies that people actually watch rather than just the art house stuff that usually gets nominated).

So essentially Warner Bros. thinks The Dark Knight Rises should be nominated in every category its eligible for, which sounds pretty good to us. Whether the Academy will actually nominate the film remains to be seen, but Warner Bros. at least deserves credit for making the push to get a comic book movie the recognition it deserves. The 85th Annual Academy Award nominations will be officially announced on January 10, 2013.

Everything Announced for This Week's WWE Raw (Sept. 28)