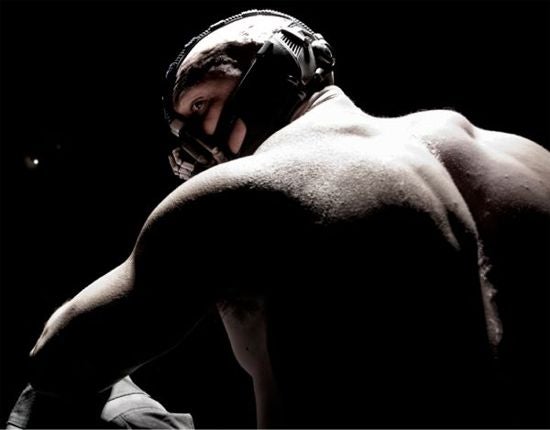 is one of the most anticipated movies of the summer of 2012, so it's only fitting that Warner Bros. would build up anticipation by premiering a prologue to the movie. Several members of the Hollywood press have already seen The Dark Knight Rises prologue, and a wider release of the prologue is coming soon. It's kind of amusing that many press sites seem to be posting a statement about how they are going to honor Warner Bros. request not to reveal a play-by-play of the footage, followed by what appears to be a detailed explanation of exactly what happens in prologue. Did Warner Bros. really think any in the press were actually not going to describe what they saw? In the "interest of preserving the mystery of the movie", MTV only reveals that The Dark Knight Rises prologue kicks off at Gotham District Attorney Harvey Dent's funeral, followed by an action sequence on a plane with Bane, and ending with glimpses of Batman, Catwoman, and cop John Blake. MTV describes Bane as a "horrific, maniacal force," but they also say he speaks in a "garbled, aggressive German accent." The Daily Beast also notes Warners Bros. request, before revealing the details of the footage. According to The Daily Beast, The Dark Knight Rises prologue focuses on apparent terrorists trading a mystery doctor and three masked prisoners to CIA operatives for a briefcase filled with cash. The CIA operatives question their new prisoners about the whereabouts of Bane, but in a twist, one of the prisoners turns out to be Bane. The Daily Beast also makes note of the way Bane talks, describing it as a "quasi-English accent" that was "impossible to understand." The Daily Beast also reveals a cool quote where a CIA operative asks Bane if it was his plan to get caught to which Bane replies, "It was my plan to crash this plane." The scene then wraps up with a midair plane-jacking. The final image of the prologue is also revealed to be a doozy, showing Bane's clenched fist holding up Batman's ripped face mask. The plane footage is definitely getting rave reviews for its intense action sequences, but Bane sounding somewhat incomprehensible seems to be a common theme in much of the early feedback. Hopefully, Warner Bros. will work on that before the actual movie is released, as part of the benefit of these early prologues is they learn what the audiences like and don't like. For those wanting to take in the footage, Warner Bros. is actually offering an early viewing of The Dark Knight Rises prologue at select IMAX theaters on Tuesday, December 13, 2011. More information on how to gain tickets to the showings can be found on the website OperationEarlyBird.com. The Dark Knight Rises prologue will also be shown before select IMAX showings of Mission Impossible: Ghost Protocol starting on Friday, December 16, 2011.

The Dark Knight Rises Prologue: An Incomprehensible Bane On A Plane